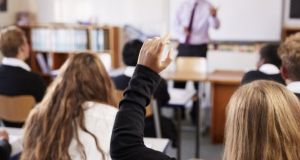 Gaelscoil Uí Drisceoil in Glanmire, Co Cork closed earlier this week after Covid-19 cases were detected across a number of classes. Photograph: iStock.

A school which was forced to close after the discovery of 17 coronavirus cases says it believes the outbreak could have been contained if there was greater transparency over sharing data at an earlier stage.

Gaelscoil Uí Drisceoil in Glanmire, Co Cork closed earlier this week after Covid-19 cases were detected across a number of classes.

The school said it was first alerted to a positive case on November 15th last, followed by other cases over subsequent days.

However, it has since emerged that another case had been detected within the school community several days previously, which the school was unaware of.

It is understood that public health authorities may have been provided with inaccurate information at the time about whether this first case was on the school premises while infectious.

Dr Seán Ó Conaill, chair of the school’s board of management, said staff and students had done an “amazing job” in taking all necessary precautions since it reopened.

However, he said the fact that the school was not alerted to the first positive case for several days meant it was unaware of a heightened risk that the virus may have been circulating in the school.

“Perhaps the HSE needs to look at how they communicate these cases to schools. We need to weigh up the right to privacy versus the general public health. At a national level, that needs to be looked at,” he said.

He added that the school had been working closely with the HSE and he had sympathy that they were “only working with information they had to hand” at the time.

In a statement, the HSE said public health officials were in close contact with the school principal to assess the situation and to provide advice and support to parents, teachers, and students, she added.

“We thank the staff, pupils and families for their co-operation with this measure, which will ensure the safety of students, staff, and the wider community,” the statement says.

“We’d like to reassure both the school community and the wider community that the department of public health locally, supported by national colleagues, are working closely with the school to ensure the outbreak is investigated and controlled.”

In a letter sent to parents earlier this week, the HSE said that it is “unusual to see an outbreak of this scale among a school population.”

The letter said school management had implemented appropriate Covid-19 control measures and was cooperating completely with the public health investigation.

Given the high number of cases, the HSE said it had decided to test the rest of the school population, both children and staff, and all children were now advised to restrict their movements until Tuesday, December 8th.

All children not identified as a case or close contact will be referred for two tests, a number of days apart.