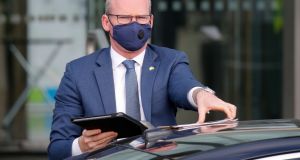 Minister for Foreign Affairs Simon Coveney has said he believes Ireland “will do well” from the EU compensation fund to cushion the economic disruption from Brexit.

Following The Irish Times report on Thursday that the €5 billion Brexit Adjustment Reserve fund is the subject of fierce rivalry with France, which is seeking much of the pot as compensation for fishermen, Mr Coveney said that “Ireland is certainly going to be first in line for that in the levels of disruption we have to deal with”.

He stressed the fund should not be seen as exclusively about fishing.

“There are many other areas being disrupted that will need financial support to actually help us get through that disruption, to reconfigure, and reshape certain sectors of our economy linked to Brexit.”

He also warned that it would be difficult to secure Irish interests in any final Brexit trade agreement.

“Irish interests have been factored into the solutions that have been agreed. And we have to try to now ensure that the final agreement on a future relationship, and a trade agreement can be reached that does the same. But that’s not easy.”

During parliamentary questions Mr Coveney told the Dáil “I am confident that Ireland will do well in the context of that Brexit adjustment fund which should not be seen as a fishery fund.”

He said that “fishing for me is about trying to hold on to as much fishing opportunity as possible across the pelagic sector and across the commercial sector”.

He told Fianna Fáil TD Christopher O’Sullivan “the danger here is that the conversation moves to compensation as opposed to protecting fishing interests and access to quota share, and I have tried to resist that throughout this process.

“The Government is interested in protecting fishing interests to ensure we have a fishing industry in the future.”

He said the Brexit adjustment fund and what proportion of that went to fishing was a separate issue and he had had conversations with the European Commission about it.

The Minister told him that said Ireland is “looking for a fair outcome”.

The Brexit Adjustment Reserve was agreed in a landmark EU budget deal this summer to help the countries hardest hit by Brexit, and with Ireland’s growth forecast to be the worst affected in the bloc, the Government hoped to get the lion’s share.

However, with French president Emmanuel Macron gearing up for a re-election campaign against far-right rival eurosceptic Marine Le Pen, the possibility of French fishing communities losing access to their traditional grounds has become deeply politically sensitive, leading Paris to make a bid for much of the cash to soften the Brexit blow.

As the commission prepares to draw up proposals on how the fund should be divided and what criteria should be used to calculate the impact of Brexit, there has been fierce lobbying by member states to tip the calculation in their favour.

“Lots of countries are eyeing up that fund,” a senior EU Commission official said. “France are looking to dip into the fund. It will be a lively debate between member states and the commission.”