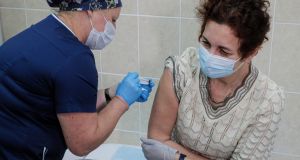 A volunteer is injected with a dose of Russia’s Covid-19 vaccine, Sputnik V.

The developers of Russia’s Sputnik V coronavirus vaccine have said new preliminary data show it is more than 95 per cent effective, an improvement on earlier results that puts it on a par with potential western competitors.

Russia and foreign partners plan to make enough of the vaccine to inoculate 500 million people next year, and it will be considerably cheaper than rivals from Pfizer-BioNTech and Moderna, according to Moscow’s state-run Gamaleya research institute and the Russian Direct Investment Fund (RDIF).

Earlier this month, they announced that analysis of the first batch of results from phase three clinical trials showed Sputnik V to be 92 per cent effective.

Pfizer-BioNTech and Moderna subsequently revealed that their vaccines – made using so-called mRNA technology – prevented Covid-19 in about 95 per cent of cases, while Britain’s AstraZeneca said a vaccine developed with Oxford University showed 70 per cent efficacy, and up to 90 per cent in certain doses.

Russia says the two-dose Sputnik vaccine will be sold internationally for less than $20 (€16.85) per person.

“Therefore, Sputnik V will be two or more times cheaper than mRNA vaccines with similar efficacy levels. Vaccination with Sputnik V will be free of charge for Russian citizens,” the RDIF announced. “The first international deliveries...will be made to customers in January 2021.”

AstraZeneca plans to price its vaccine at $3-$5 (€2.53-€4.21) per dose and to sell at cost to developing nations. Pfizer-BioNTech is charging the US government $19.50 for each dose of its two-shot vaccine and Moderna executives have given a guide price of $25-$37 per dose.

Russia in August became the first country to officially register a coronavirus vaccine, even though Sputnik V had not completed clinical trials. Last month, the country registered a second vaccine, EpiVacCorona, which is also undergoing late-stage evaluation.

Russian president Vladimir Putin acknowledged last month that manufacturers were having difficulty scaling up production of Sputnik V, and other officials said a maximum of 2.3 million doses would be made this year rather than the initial target of 30 million.

Several senior officials and one of the president’s daughters have reportedly been vaccinated with Sputnik V, but Mr Putin (68) has not been inoculated.

“We have not yet begun widespread vaccination and the head of state can’t take part in vaccination as a volunteer. It’s impossible,” said Kremlin spokesman Dmitry Peskov.

Russia has recorded more than 2.13 million coronavirus cases, the fifth-highest total in the world, and reported 24,326 new infections on Tuesday; 37,031 people in Russia have died from Covid-19.