Minister for Justice Helen McEntee has said that the Government "acted appropriately at all times" during the appointment of Supreme Court justice Séamus Woulfe. Video: Oireachtas TV 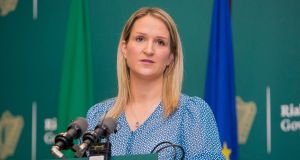 Minister for Justice Helen McEntee. “One of the great strengths of the Irish judiciary has been its non-political characteristics,” said McEntee as she was rattling through her prepared script. Photograph: Gareth Chaney

Turning her face against the blindingly obvious, Helen McEntee stood her ground and stuck grimly to her threadbare lines, holding up extremely well for someone with barely a leg to stand on.

She picked her spot on the wall and focused for two hours on missing the point, repeating the same unsatisfactory spiel until the Ceann Comhairle called time and released her from questioning.

This so, was the much-resisted and much-anticipated Dáil showdown between the Minister for Justice and the united forces of Opposition over her decision to appoint the outgoing Fine Gael-appointed attorney general to the Supreme Court after she assumed office in a new Coalition Government under a Fianna Fáil Taoiseach.

“I am happy to set out the details of this appointment for the information of deputies,” she began, also happy to ignore the fact she was only there because wild horses dragged her to the Convention Centre and teams of council workers were outside filling in the deep ruts left by her heels in the tarmacadam between St Stephen’s Green and Spencer Dock.

So keen was the Government to keep its Minister away from proper Dáil scrutiny on the matter, it held out for over a fortnight until the weight of pressure forced an embarrassing climbdown from a previously bullish Taoiseach.

Many people assumed this was because they feared first term Cabinet Minister McEntee might not be temperamentally suited to withstand the pressure of sustained, hostile questioning from a fired-up Opposition when the issue to be defended was more or less indefensible.

A nice, quiet-spoken young woman like Helen, sure she’d probably faint, or start to cry. Not a bit of it. She’s an experienced politician.

The reason Micheál Martin (who comes out of this saga looking like a Fine Gael patsy) and Tánaiste Leo Varadkar (who comes out of this looking like a bit of cad) were so determined to scupper this stand-alone information session with the Minister was because they knew they would be sending her in to justify a shambles they created. It’s no wonder she looked uncomfortable, having been dropped in it by her brave bosses.

Opposition spokespeople queued up to tell her nobody believes she chose Séamus Woulfe off her own bat for promotion to the highest court in the land without seeking advice from any quarter before making her decision.

They queued up to tell her they aren’t stupid and know that judges in this country are often – but not always –appointed because of their political connections.

They queued up to tell her they know the official procedure and it isn’t how she was selectively presenting it.

In a searingly incisive contribution, former Labour leader Brendan Howlin, veteran of three governments, nailed the Coalition’s cynicism and McEntee’s dilemma. He has sat in cabinet, he knows how it works. All senior appointments were the subject of cross-party discussion.

The minister for justice may formally propose one name to cabinet when the deliberating is done but “it was never, never the role or exclusive right of that minister to determine on their own who should be nominated” he said.

Drawing on his years of experience, the Minister’s assertion that she set aside this process and presented it as a “done deal” to the Taoiseach, Tánaiste and leader of the Greens and they “simply nodded it through as a done deal” was patently “absurd”. He filleted her lame story and, in the process, filleted Varadkar and Martin. “What is undermining your position and undermining the credibility of Government is the maintenance of the unbelievable.”

The maintenance of that story was McEntee’s only goal. She concentrated almost solely on something called “The process” which “is what it is” and was “adhered to” at all times. But she over-embellished the story, as is often the case in these situations by introducing a new detail.

She revealed Varadkar, the Fine Gael leader, her boss, former taoiseach and now Tánaiste, told her when she was the fledgling Minister for Justice with no practical experience of the law,, that he knew The process existed. She said she had been already “alerted” about the existence of The process and then Varadkar remarked in passing that Séamus Woulfe was in The process and he thought he would probably make a good judge, but that meant nothing much to McEntee because she doesn’t do “criteria”.

“What I hope I have done this afternoon is very clearly set out that there is a process in appointing a judge,” she told the Dáil after two hours of processed fudge masquerading as her explanation of “The process” and how she implemented it.

Howlin recognised what was happening. Instead of acknowledging politics was behind the appointment – legally and constitutionally sound, if not best practice, the Government tried to cover this up.

“As Richard Nixon discovered, it is not always the action that is your undoing, sometimes it’s the strain involved in presenting a version of events that to anybody who actually knows the process or simply follows politics or history, is not credible.”

So how did the Minister come to chose Woulfe, who never sat on the bench, over the five sitting judges who applied and over a further list of eligible legal names worthy of consideration?

We may never know because the Minister had “no criteria”. She just thought long and hard, all on her own, not even asked any of the many experts in the Department of Justice steeped in the niceties of judicial appointments far longer than her wet weekend in the job. But when McEntee knew, she just knew. Rather like somebody who says “I don’t know anything about art but I know what I like” she just breezed on in and plumped for Séamus.

And Varadkar (well, he told McEntee he though Séamus would make a good judge, although that didn’t influence her) and Martin and Ryan said that was fine by them and waved judge Woulfe off with their blessing.

“One of the great strengths of the Irish judiciary has been its non-political characteristics,” said McEntee as she was rattling through her prepared script.

“I was in knots of laughing when I heard you saying that” chuckled Bríd Smith of People Before Profit. It was certainly one of the best lines of the day.

But there was sympathy, a little bit of it, for McEntee. Catherine Murphy of the Social Democrats and Independent Catherine Connolly were among a number of deputies who commiserated with her for “receiving a hospital pass”.

It was indicated Séamus was in the frame ( Martin and Ryan were never told of the other contenders) and McEntee presented her judicial fait accompli to the Cabinet.

Suddenly, the name which had been in the back of our minds while McEntee was gamely, if very uncomfortably toeing the party line, came to us.

And it was the name of Gráinne Carruth. The woman who worked for Bertie Ahern as a secretary and was put through misery in the witness box of the Mahon tribunal as, torn between her loyalty for Bertie and her honest desire to do the right thing, she broke down and cried.

He didn’t have to put her through it. McEntee didn’t deserve to be put in the position she found herself in on Thursday either.

By teatime, Fine Gael was rolling out Junior Minister Colm Brophy onto Drivetime radio. Even he was floundering.

“Well, I think what the Minister said there was perfectly credible” he blustered. “She followed the process.”

All the Brasso in the world couldn’t cope with Brophy’s remarkable neck.

Later, Fianna Fáil’s James Lawless, chairman of the Justice Committee, tried to make the best of the situation.

“We are where we are. . . so we take up learnings” was the best he could manage. He thought there were “multiple learnings emerging”. And let us not forget “we have a pandemic bearing down”.

Not a great day for the Government.

Going by any criteria.