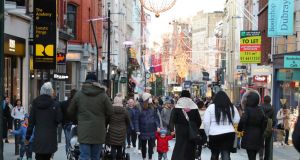 Richard Guiney of the Dublin Town business group said many of challenges now experienced were expected, just not quite so soon. Photograph: Nick Bradshaw/The Irish Times

Covid-19 will be a “catalyst” for the redevelopment of Dublin similar to “war, famine and pestilence”, a conference on the future of the city has heard.

Retail is unlikely to regain its position in Dublin city centre, with the city’s future likely to based on hospitality and “experiences”, business representatives told Dublin City Council’s Reset Summit.

“Dublin city centre is very much mirroring what happening across Europe where the larger the city, the harder the impacts of Covid are being felt,” said Richard Guiney of the Dublin Town business group.

However, he said many of challenges now experienced were expected, just not quite so soon.

“Covid is one of those catalyst factors that happens throughout history, when a negative thing like war, famine and pestilence consolidates and accelerates trends,” he said.

He said Grafton Street and Henry Street are approaching 10 per cent vacancy “and there isn’t a long queue of new entrants” which mean consideration would need to be given to how the city was planned.

Ibec chief executive Danny McCoy said it was critical that the office worker population returned to the city.

“Fundamentally Dublin is going to be a service driven economy, and the experience economy is where the ‘value added’ is going to be,” he said. “Get those factors right for the citizens of Dublin and it will then also continue to be that basin of attraction for the globalised workforces.

“If we don’t get a plan to get the office back in the next six months we will genuinely put ourselves at risk.”

Pat McCann, chief executive of hotel group Dalata, said while the lack of office workers was a problem “equally we are missing millions of tourists that keep that vibrancy”.

“If we don’t have the through put of tourism into Dublin our citizens will be worse off because a lot of what they are used to having available to them wouldn’t be available because those businesses wouldn’t exist,” he said. “So there are, real advantages of the citizens of Dublin to have a strong vibrant hospitality sector.”