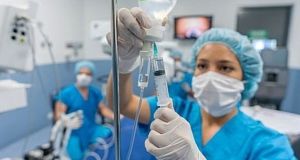 Hospital bed occupancy remains high in Northern Ireland at 99 per cent, according to the Department of Health, with 445 patients receiving treatment for Covid-19.

By spring Covid-19 vaccines should be doing the “heavy lifting” to combat the incidence of the virus, the North’s chief medical officer Dr Michael McBride has predicted.

In the meantime, Dr McBride said on Tuesday, people must strictly observe the next two-week period of lockdown restrictions beginning on Friday to ensure that there can be some “respite” from the virus over the Christmas holiday period.

He made his appeal on a day when the North’s health department in its daily bulletin recorded 11 more deaths taking the Covid-19 death toll to 947.

The number of confirmed coronavirus cases dropped to 79 bringing the total number of cases since the outbreak of the pandemic to 50,143. The 79 figure was down considerably from the 208 cases recorded on Monday but this was explained by Tuesday’s data being based on the testing of only 812 people.

The daily test rate normally is around 3,000.

Hospital bed occupancy remains high at 99 per cent, according to the department, with 445 patients receiving Covid treatment. There are 37 Covid patients in Northern Ireland intensive care units with 29 on ventilators.

Chief medical officer Dr McBride said that the R number – the rate of transmission of the disease – was on or about one, and needed to be below one to limit the spread of the virus.

While there had been a decrease in the number of Covid cases there was not the same decrease in hospital and ICU admissions.

He said it was vital for people to redouble their efforts to keep the virus at bay during the next two weeks of lockdown beginning on Friday.

“We do need these two weeks to ensure that we are able to get to the other side of Christmas without our health service being overwhelmed and without the need for further interventions,” he said.

Dr McBride said it was to be expected that there would be another increase in the rate of infection in the new year. That would be the “inevitable payback” for the relaxations coming over Christmas.

Dr McBride said that any relaxation brought a “price to pay” but equally there were benefits in that people needed some “respite from the virus”.

“There is hope that we are beginning to see the far end of this,” he added.

Dr McBride said, “By spring the vaccines will be doing the heavy lifting and much of the restriction that we’re now using to keep this virus in check will be increasingly less likely to be needed, particularly as we head into the summer months. So I think it’s important that now all redouble our efforts to make the most of these next two weeks.”

Meanwhile, the Department for the Economy has provided some clarification on the £95 million allocated for a voucher to stimulate High Street spending in Northern Ireland.

Finance Minister Conor Murphy suggested that in the new year each household would receive vouchers worth £200.

Now however, the economy department is considering offering a voucher of between £75 and £100 to every individual in Northern Ireland, possibly aged over 16 or 18. It can’t be used online or in betting shops.

The Northern Executive also clarified on Tuesday that during the two-week shutdown that non-essential retail, while closed to customers, will be permitted to operate a “click and collect” service.

And while Masses and other Church services are not allowed churches can open for individual acts of worship. Drive-in church services also will be permitted for the two-week period.

Weddings and funerals can take place with a maximum attendance of 25 in churches.

Said First Minister Arlene Foster, “This weekend sees the beginning of Advent and we have agreed that it is important that all places of worship can remain open for individual prayer.”

Added Deputy First Minister Michelle O’Neill, “We have listened to views on a range of issues and agreed that retail businesses will be able to operate a click and collect service in a controlled manner that helps to ensure the safety of both customers and staff.”