Fifteen children under five poisoned by heroin and ecstasy 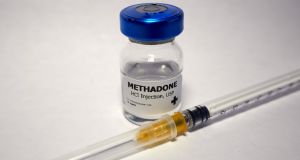 Fifteen children under the age of five have been hospitalised due to poisonings by narcotics such as heroin and ecstasy in the last five years.

Another four children aged between five and 13 were admitted having ingested the same drugs. The most common cause of narcotic poisoning among children under 13 was methadone, with one child a year being poisoned by the drug between 2014 and 2017.

Methadone is an opioid derivative most commonly prescribed to heroin users to help reduce addiction. Many users are permitted to take the drug home instead of having to ingest it at a treatment clinic.

The figures were released to The Irish Times by the National Poisons Information Centre following a Freedom of Information request.

The rest of the admissions comprised under 13s who had taken amphetamines, ecstasy and ketamine. There were two instances where a child was admitted having taken an unknown narcotic.

There were no reports of a child being poisoned through ingestion of head shop drugs, officially termed “new psychoactive substances”.

Another 26 under 13s were admitted as in-patients as a result of ingesting alcohol. When the patient is under 13 the ingestion of alcohol or drugs is classified as a poisoning rather than an overdose.

It is understood none of the admissions resulted in a fatality.

The figures are a fraction of the number of child poisonings which result yearly from legal or prescription drugs.

In 2017, the latest year for which figures are available there were 660 poisoning incidents involving children under 10 years of age ingesting paracetamol, with 198 of those requiring medical assessment.

There also were more than 300 poisoning incidents involving under 10s taking ibuprofen and similar products.

There were another 44 poisoning cases of under 10s taking hypnotics such as Xanax, with 32 per cent showing symptoms as a result.

In total there were 5,598 poisoning cases involving children under 10 in 2017, 88 per cent of which involved children under five. The majority of these occurred after the child ingested household products such as detergent or bleach.

There were no fatalities and the vast majority of children remained symptomless. Two children developed moderate or serious symptoms.