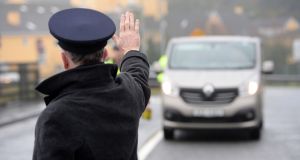 The European Commission has strongly emphasised the need to preserve a frictionless Border in Ireland if longstanding and extensive North-South cooperation is to be sustained. File photograph: Dara Mac Dónaill/The Irish Times.

The European Commission has strongly emphasised the need to preserve a frictionless Border in Ireland if longstanding and extensive North-South cooperation is to be sustained.

In a working paper published on Thursday, the commission’s task force on Brexit sets out an exercise conducted with the British last year in “mapping” some 147 North-South projects and programmes in the context of obligations on the UK arising from the Belfast Agreement. The UK published its summary of the work last December.

The study became the basis of both the December 2016 Joint Declaration between the UK and the EU and subsequently of Article 13 of the Irish Protocol to the Withdrawal Agreement.

“It was consistently recognised that virtually all areas of North-South cooperation are predicated on the avoidance of a hard border including related customs or regulatory checks and controls,” the report says.

In detailing areas of co-operation ranging from animal and plant standards, to cross-Border healthcare and environmental protection, the report warns that impediments on the Border threaten the viability of such projects.

In the context of the danger of a no-deal Brexit in October, the report will strengthen the hand of those like the Irish Government who argue that the UK’s obligation to the controversial backstop goes back to the Belfast Agreement.

The Withdrawal Agreement including the Irish Protocol has been rejected three times by MPs in the House of Commons.