Leadership debate TV review: In a wily tactic, Johnson pretended he wasn’t a politician at all 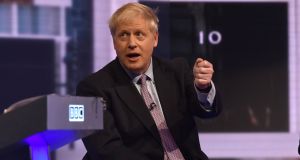 Nobody trusts politicians; least of all politicians. In Our Next Prime Minister (BBC One, Tuesday, 8pm), a quick, jagged hour of polite posturing and meaningless promises, the five Conservative Party contenders for the top job took questions from members of the British public. In the words of host Emily Maitlis, this might “test their mettle”.

In the case of frontrunner Boris Johnson, a man of so little conviction he wrote in support of both sides of the Brexit referendum and seemingly made up his mind with all the consideration of a coin toss, it might be easier to test his metal, which has always been quicksilver.

“My job is to seek clarification and answers where none are forthcoming,” explained Maitlis without looking directly at Johnson. “I will nudge them along if their answers are too waffly and take too much time.”

If this gave the impression that Johnson would find more of an opponent in Maitlis than his fellow Tories, that was not the case at all. No, Johnson’s main opponent tonight would be Boris Johnson, a man with a long habit of saying, writing and doing such stupid things.

First though, in one truly wily tactic, Johnson decided to behave as though he was not a politician at all. In response to one question seeking a guarantee that Britain would exit the EU by Oct 31st, the third deadline extension, Johnson sympathised.

“The politicians said they were going to honour that verdict,” Johnson said, as though he had hardly met such scoundrels. “Politicians need to take their responsibilities seriously.”

His rivals made the fatal error of admitting that they actually were politicians. Jeremy Hunt even used the dread phrase “people like us”, while Michael Gove’s blowhard (I use the term advisedly) claimed to have invented Brexit (“Because I started this, I will finish this”).

Worst of all, Rory Stewart, the insurgent candidate, wasted a considerable amount of the debate by telling the truth.

Stewart, a man with Benedict Cumberbatchian height and Eddie Remaynian boyishness, was the only candidate on the BBC’s punishingly high stools who could keep his feet firmly on the ground. So did his rhetoric.

The Withdrawal Agreement, Stewart reasoned, could not be renegotiated, and any promises that it could (such as those from all his opponents) were pure fiction. Leaving without a deal, an option the others kept on the table, could never happen without the consent of parliament, he said. He even brought metaphors: “There’s only one door out of this, which is called parliament. I am the only person trying to find the key to the door.”

Speaking of barriers … “Everybody understands the solutions to the Irish Border,” said Johnson at one point, which, of course, was an immense relief to hear. Tragically, though his voice trailed off into indeterminate blond cloud of nothing. Damn. So close.

Pressed by a question from Belfast man Mark, everyone agreed there could be no return to a hard border, while also insisting the UK could not be held within the customs union, which is the implication of the apparently intolerable backstop.

Maitlis valiantly attempted to remind Johnson of his own blasé pronouncements, comparing the intractable issue to the nuisance of congestion charges. But that was the old Johnson, with whom the new Johnson no longer seemed acquainted. “We can solve the questions during the implementation period,” he waffled. The implementation period? What, like a backstop?

But Boris hadn’t come to take questions. “Boris Johnson,” Maitlis said wistfully during Johnson’s faffing, “Can you hear me?”

Alienated pro-Brexit Conservative voters seemed similarly despairing. “I now consider myself partyless,” complained one defector to the Brexit Party, a provider of much simpler answers. The questioner didn’t much like paying taxes, bless him, and the Tories generally agreed that he really shouldn’t have to, but also that public spending, already cut to the quick, shouldn’t be affected.

(Just think of that £350 million a week Johnson said would go to the NHS, a lie that, like his lie about EU regulations against bendy bananas, many Britons somehow still believe.)

Such was Stewart’s disbelief, that he was forced remove his tie in “honest and realistic” response. “Everyone is promising things they cannot get,” Stewart said, with a frankly unsporting attention to reality. “I don’t think this is the time to be promising tax cuts.” But were the Tory faithless ready for that hard wallop of truth telling? Oh, take a wild guess. “Rory, you’re completely out of touch,” sniffed the questioner.

On inadequate social care, Islamophobia and the environment, the assembled generally commiserated. But Johnson pulled off a daring manoeuvre by presenting his own great success, as the great-grandchild of a Muslim immigrant who rose to become a xenophobic Foreign Secretary, as a “tribute to this country”.

In answer to the question of whether “words had consequences”, Johnson insisted that criticism of his public contradiction of Nazanin Zaghari-Ratcliffe’s defence, as the British-Iranian woman imprisoned in Tehran on spying charges, was an unhelpful exercise in “pointing the finger”. Indeed, why not show the finger instead with such a response.

He did something similar to do to a 15-year-old environmental youth striker who was understandably unimpressed with the panel’s long-fingered approach to climate change. “Climate change isn’t an issue of tomorrow, it’s an issue of today,” said Erin.

Johnson’s flip response, directed at his colleagues, was off microphone, muted and mocking (“Back to the drawing board!” he scoffed). But then came a much more serious existential threat: the prospect of the new PM immediately calling a general election, something the unhelpful old Johnson once demanded of Gordon Brown.

Hell no, was the response given by all. Indeed, if this debate proved anything, the last thing these candidate need right now is to face the public.

The real Sound of Music: Maria was no flibbertigibbet, and she didn’t teach the kids songs
6