Fianna Fáil’s Barry Cowen described Paschal Donohoe as the “Freddie Mercury of Irish politics, with your pint of magic stuff” accusing him of not being straight with the public over how cost overruns would affect other capital expenditure plans. 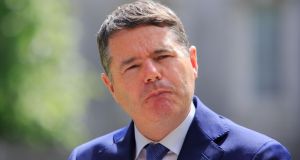 Minister for Finance Paschal Donohoe has been accused of not explaining where he will find up to €900 million to cover cost overruns on key infrastructure projects.

Running “roughshod” over Fianna Fáil would be a “mistake you’ll regret,” the Minister for Finance was warned during a heated Dáil row about funding for key infrastructure plans.

Fianna Fáil’s public expenditure spokesman Barry Cowen on Thursday described Paschal Donohoe as the “Freddie Mercury of Irish politics, with your kind of magic stuff” when he accused the Minister of not being straight with the public over how cost overruns on some major projects would affect other capital expenditure plans.

He said Mr Donohoe must have “magic money” and he reminded the Minister that he was in office because “we have the good grace to allow you be in Government”.

During Dáil questions on public expenditure and reform on Thursday, Mr Cowen became irate when the Minister claimed the Fianna Fáil TD had done a U-turn on the National Development Plan.

“You said the plan didn’t exist....You now hold the view that it is of such high value that it will make such a difference to people that you’re very eager to make sure it’s not affected at all,” Mr Donohoe told the Dáil.

But rejecting the claim, the Offaly TD said he respected the commitments made in the plan and acknowledged the success and benefit it could provide.

“I need to know the money is there to meet the promises you’re making when you’re not being straight with the Irish people,” he said.

In an angry outburst Mr Cowen said: “I take exception to the point you’re making. . . . You’re playing roughshod with us and it’s a mistake you’ll regret”.

The Minister had been questioned about how he would fund other capital projects in the context of the cost overruns at the national children’s hospital and the National Broadband Plan.

Mr Donohoe said “it is my intention that no other projects will be affected as a result of decision to move ahead of national broadband plan”.

He said there were other reasons projects could be delayed including the planning process, decisions Government departments make or the length of time of the tendering process.

But he said if Mr Cowen did not like the Government’s approach to the broadband plan he would eventually have to put his own cards on the table.

Mr Cowen replied: “you are in Government and you have responsibility and you have to make priorities on behalf of this Dáil because you have a majority. “Playing games with me about what I’d do or wouldn’t do is not up for discussion.”

The Fianna Fail spokesman said independent appraisals of the plan “have said that your position is not credible and it’s very worrying that you haven’t sought to clarify your comments in relation to commitments you have made that no project would be affected”.

He said: “If that is what you’re saying, €900 million in extra capital funding will be provided with no effect on projects already announced”.

He said that was a lot of money and the Minister had not indicated where it was coming from.

“You criticise ourselves and the Opposition for fantasy finances but you haven’t indicated where you’re going to find all this money.”

Mr Donohoe said he was confident the national finances were moving into a position of surplus and said there was scope in the context of projects that might be delayed for other reasons including planning permission, the tendering process or other issues.