Ireland fourth-most expensive for food and soft drinks in EU

State’s alcohol prices are second priciest in bloc behind Finland 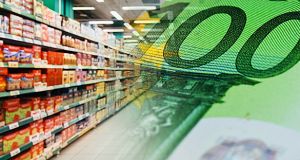 Milk, cheese and eggs are highly priced in Ireland

Ireland is the fourth-most expensive country in the EU for food and soft drinks, according to new Eurostat data.

Irish food baskets cost 20 per cent more than the EU average in 2018, ranking the country fourth-highest for prices of food and non-alcoholic drinks.

Consumer prices varied greatly across Europe, with levels ranging from 66 per cent of the EU average in Romania to 132 per cent in Denmark.

Ireland tied with Finland, as the fourth-most expensive countries for food and non-alcoholic drinks.

Milk, cheese and eggs are highly priced in Ireland, with the country ranking fourth highest in the EU. Irish consumers will also pay above the average for a loaf of bread, as the country is seventh dearest for the cost of bread and cereals.

Meat lovers have an easier ride, with prices in the country just 5 per cent above the EU average, meaning Ireland avoids being among the top ten most expensive countries for meat products.

With a high tax rate, alcoholic beverages are second most expensive in Ireland, topped only by Finland. The country also ranked second highest for tobacco, after the UK. Purchasing tobacco in Ireland costs more than double the EU average.

However, Tara Buckley – managing director of the Retail, Grocery, Dairy and Allied Trades Association – said people in Ireland are paying less for their groceries than ever before.

“The increase of own-brand products has made pricing very competitive,” she said, adding that customers may need to shop around to find a better deal.

Stores cannot survive if they do not keep pace with the top supermarkets, Ms Buckley said. “If a shop is overpricing their customers, they don’t come back. If Irish people want to buy cheaper they can.”