Irish Times view on the Tory party leadership: Boris Johnson is evading his way to victory

For the sake of his party, his country and its neighbours, frontrunner must face greater scrutiny 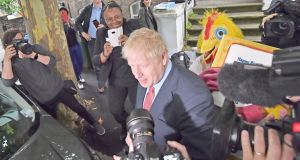 Boris Johnson is doorstepped by the media as he leaves his London home. Photograph: Dominic Lipinski/PA

Boris Johnson’s resounding victory in Thursday’s first round of voting by Conservative MPs has made him the apparently unstoppable favourite to succeed Theresa May as British prime minister. His 114 votes, more than one third of the total, exceeded the combined votes of the next three candidates, foreign secretary Jeremy Hunt, environment secretary Michael Gove and former Brexit secretary Dominic Raab.

Some of Johnson’s supporters want other candidates to follow health secretary Matthew Hancock’s example by withdrawing from the contest to give him a clear run. And although Johnson has agreed to take part in a BBC candidates’ debate next Tuesday, he is dodging tomorrow’s debate on Channel 4 and took only six questions from reporters at this week’s campaign launch.

For the sake of his party and his country, and that of its neighbours, Johnson must face greater scrutiny as 160,000 Tory party members choose Britain’s next prime minister. His promise to take Britain out of the EU on October 31st, with or without a deal, raises as many questions as it answers and he should be obliged to address them.

Johnson suggested on Friday that the withdrawal agreement could be “disaggregated” to remove those parts he found offensive. And he called for the Northern Ireland backstop to be replaced by alternative arrangements that would see regulatory checks conducted away from the Border. Neither of these proposals is acceptable to the EU but the negotiating plans set out by some of his rivals have been almost as fanciful. Hunt wants to expand the British government’s negotiating team to include members of the DUP and backbench Conservative Brexiteers. And home secretary Sajid Javid has suggested that a British offer to pay for a “digital Border” would persuade Dublin to drop the backstop.

International development secretary Rory Stewart is alone among the remaining candidates in acknowledging that there is no alternative to the withdrawal agreement if Britain wishes to leave with a deal. Stewart’s insurgent campaign has won him a huge following on social media but he will struggle to win enough votes next Tuesday to remain in the contest.

Gove, whose campaign was knocked off course by a controversy about his past cocaine use, also accepts that the withdrawal agreement will not be reopened. His demand for a binding timetable for the introduction of alternative arrangements to replace the backstop is negotiable in Brussels, even if Dublin views it with suspicion.

All these proposals need to be debated and tested in media interviews, public debates and hustings across the UK. If Conservative party members still chooser Johnson after such scrutiny, they will at least have done so with their eyes open, fully accountable for handing him the reins of government at a moment of national crisis.

1 Exiting Level 5: Ministers to push for reopening of shops, restaurants and churches next week
2 How to gift your child a house deposit . . . tax free
3 BOI customers to be charged twice with bank fees on New Year’s Eve
4 Alison Curtis: My guilt at not going for a second pregnancy
5 Trump directs team to co-operate on Biden transition – but insists fight continues
Real news has value SUBSCRIBE