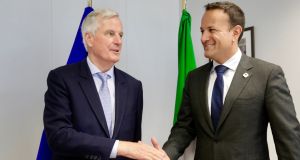 Taoiseach Leo Varadkar has warned that the EU has run out of patience with the UK and that there is “enormous hostility” among European leaders to any further Brexit extension beyond October.

“There is very much a strong view across the European Union that there shouldn’t be any more extensions,” Mr Varadkar said in Brussels on Thursday.

“While I have endless patience, some of my colleagues have lost patience quite frankly with the UK and there is enormous hostility to any further extension.

“So I think an extension could really only happen to facilitate something like a General Election in the UK or perhaps something like a second referendum if they decided to have one,” Mr Varadkar said.

“What won’t be entertained is an extension for further negotiations or further indicative votes – the time for that is long since past.”

Mr Varadkar was speaking before entering the two-day summit of EU leaders in Brussels, where the main business will be the allocation of top EU jobs for the next five years.

Differences among EU leaders on who should get the jobs, including between France and Germany, as well as between the party groups in the new European Parliament continue despite a frantic last minute round of diplomacy and politicking on Thursday morning.

He declined to say whether the Government would nominate Irish Commissioner Phil Hogan for another term, though the move is widely expected in political circles.

“Also, a crucial thing aside from the person who will be the next Commissioner for Ireland, is what portfolio we hold.

“Needless to say, we are going to want to have one that is influential,” Mr Varadkar said.

In a statement earlier in the day, after a meeting with the EU’s chief Brexit negotiator Michel Barnier in advance of Thursday’s summit, Mr Varadkar said “Brexit negotiations can only happen with the EU and not with individual governments, and . . . the Withdrawal Agreement won’t be reopened.”

However, he indicated that the EU was willing to rewrite the political declaration which accompanies the withdrawal treaty, and which paves the way for the future trading relationship between the bloc and the UK once it leaves.

The statement said Mr Varadkar had a “very good meeting to review the current situation with Brexit”.

“Michael Barnier stressed the unity of the 27 members with Ireland and its commitment to the Withdrawal Agreement,”it said.

“The Taoiseach and Mr Barnier acknowledged that we now await the election of a new UK Prime Minister and hearing about their proposed approach to Brexit.”