As London lodges for journalists and MPs revealed, organisation says ‘enough is enough’ 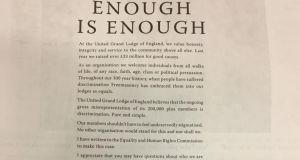 The advert placed in some UK national newspapers today, saying “Enough is Enough”

Freemasons have been “undeservedly stigmatised”, the organisation’s branch in England has declared as it embarks on a public campaign to prove it is not a secret society.

The United Grand Lodge of England has placed adverts in three UK national newspapers on Thursday under the headline, “Enough is enough”, saying it is the victim of misrepresentation.

The move comes following disclosures by The Guardian that two Freemasons’ lodges have long been in existence for members of the Houses of Commons and Lords in London, and some journalists.

The United Grand Lodge of England has told the UK Equality and Human Rights Commission that it believes the lodge’s 200,000-plus members are victims of gross misrepresentation and discrimination.

“Our members shouldn’t have to feel undeservedly stigmatised. No other organisation would stand for this and nor should we, declared the Grand Lodge’s chief executive, Dr David Staples

Freemasons will host Q&A sessions across England in coming months, he said: “I appreciate that you may have questions about who we are and what we do, so why not ask those who know?,” he said.

In Westminster, New Welcome Lodge, which recruits MPs, peers and parliamentary staff, and Gallery Lodge, established for some press in the Commons lobby, both remain active, according to Freemasonry records.

A third lodge called the Alfred Robbins Lodge, which was also set up for journalists, also continues to meet regularly in London, though the majority of press working there were completely unaware of the lodges’ existence.

One current member of New Welcome told the Guardian that its members keep press masons at arm’s length, on the grounds that while they are fellow members of the brotherhood, they are still journalists, and “they wouldn’t want journalists listening to their conversations”.

Staples said there was no contradiction between the practice of journalism and membership of Freemasonry. “Contrary to populist perception, being a Freemason helps those members in roles serving society in the broader sense, including journalists, politicians, policemen and lawyers, to be better in those jobs by encouraging them to act as better people themselves. Their membership is a positive for both them as individuals, and for society at large,” he said.

More Freemasons would declare their membership, he added, if they did not fear prejudice and discrimination: “There should be no conflict between an individual choosing whether to declare their membership or not with that individual’s ability to do their job well. But there is, because some choose to believe otherwise, and some of our detractors are doing so based on nothing other than blind prejudice,” he added.

The Freemasons’ public campaign comes after the outgoing chair of the UK Police Federation alleged that Freemasons were blocking reforms in policing and thwarting the progress of women and officers from black and minority ethnic communities.

After three years as the chair of the Police Federation, Steve White said: “I found that there were people who were fundamentally against any kind of change and any kind of progress, and they always happened to be Freemasons.”

Q&A: Freemasonry explained: a guide to the secretive society

When did Freemasonry begin? The first grand lodge, established to govern Freemasonry in England and Wales, was formed in 1717, during a meeting at a pub in the City of London called the Goose and Gridiron. At that time there were four lodges in the city. But in Scotland, a masonic lodge in Edinburgh has records to show it has been in existence since at least 1599. During the early 18th century, Freemasonry spread quickly to Europe and the British colonies.

Why are they so secretive? Freemasonry’s guiding metaphor is the craft of stonemasonry: it models itself upon the fraternities of medieval stonemasons who would use secret words and symbols to recognise each others’ legitimacy, and so protect their work from outsiders. During some periods of history, Freemasons have been persecuted – by the Nazis, for example – and have needed to go underground to survive. But there are persistent suspicions that Freemasons also remain secretive in order to conceal the way in which they can assist each other in business and the workplace.

Is there any substance to these claims? Such rumours are rarely substantiated, and masons are expected to swear an oath that they will not be involved in “any act that may have a tendency to subvert the peace and good order of society, by paying due obedience to the laws of any state”. But a British home affairs select committee heard that in 1995, the Lancashire police authority was obliged to pay £70,000 to a father and son who were assaulted and then arrested and prosecuted after stumbling on a masonic dinner being hosted by a lodge dominated by police officers. The committee heard that a police officer who investigated the fracas was a mason, as was the manager of the hotel where the dinner took place.

Is Freemasonry a religion? No, it is a secular movement, although new members are expected to acknowledge a belief in a God-like superior being, often called the Grand or Great Architect of the Universe. Anyone believing in a single deity may be admitted. Rudyard Kipling, who was a member of a masonic lodge in Lahore, wrote a number of poems about his fellow masons who were Muslims, Hindus, Sikhs and Jews. In theory, all discussion of religion and politics is prohibited within lodges.

Are the identities of all Freemasons kept secret? No, individual masons can declare themselves if they wish , and the names of senior officers of the brotherhood in England and Wales can be found in a masonic year book. The grand master is the Duke of Kent. Prince Philip is a member of a navy lodge. Others who have declared their membership in recent years include the Rev Jesse Jackson, the former astronaut Edwin “Buzz” Aldrin and musician Rick Wakeman. However, a great many masons do not disclose their membership outside the brotherhood. – Ian Cobain

1 Harry and Meghan will no longer be working members of British royal family
2 Peter Casey on the campaign trail: ‘My ideal job would be minister for health’
3 Dublin gangland figures involved in Drogheda feud that killed 17-year-old
4 Mary Lou has to call for the smelling salts as SF councillor deals a knock-out blow
5 Who was murdered teenager Keane Mulready-Woods?
Real news has value SUBSCRIBE