Department sought questions for Ian Bailey ahead of proposed interview 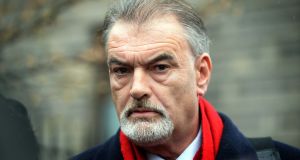 Ian Bailey last week criticised the Department of Justice after learning that it had never passed on a request from investigating French magistrate Judge Patrick Gachon in February 2013 to arrange an interview with him. Photograph: Eric Luke

A French magistrate investigating the murder of Sophie Toscan du Plantier decided not to proceed with a request to interview suspect Ian Bailey after the Department of Justice sought the questions in advance, The Irish Times has learned.

Mr Bailey (61) last week criticised the department after learning that it had never passed on a request from investigating French magistrate Judge Patrick Gachon in February 2013 to arrange an interview with him as “a protected witness” about the killing of Ms Toscan du Plantier in 1996.

Mr Bailey only learned of the request last November when his French lawyer, Dominique Tricaud found it in the French investigation file when preparing to lodge an appeal against the decision by Judge Gachon’s successor, Judge Nathalie Turquey, to indict Mr Bailey for the killing.

The department declined to comment, saying its policy was not to comment on individual cases, but now French sources have confirmed that the department sought sight of the questions the French proposed to ask Mr Bailey before passing on the request.

According to Jean Antoine Bloc Daude of the Association for the Truth about the Murder of Sophie Toscan du Plantier, the department wrote back to Judge Gachon seeking the questions advance.

But, according to Mr Bloc Daude, giving a suspect advanced sight of questions was contrary to French law so Judge Gachon decided not to proceed with his request to interview Mr Bailey.

Asked about this latest revelation, Mr Bailey’s solicitor, Frank Buttimer said: “There is something quite bizarre about the French attitude to Mr Bailey - the whole thing is Pythonesque.”

Mr Bailey was arrested by gardaí for questioning about the murder of Ms Toscan du Plantier in both February 1997 and January 1998 but released without charge on each occasion and the DPP later ruled that there was insufficient evidence to charge him with the murder of the film producer.

Mr Bailey has denied any involvement in the murder of Ms Toscan du Plantier and also denied ever making any admissions that he killed the mother of one whose family have been campaigning for over 20 years to have her killer brought to justice.