Families plead with health minister for access to drug 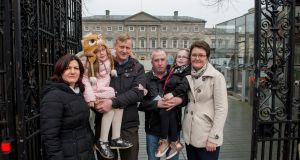 Two young girls whose access to a life-changing drug is due to end this week, visited Leinster House on Wednesday to plead with Health Minister Simon Harris to intervene on their behalf.

The families say access to the drug Vimizin, the only know treatment, has changed their lives. But because the HSE has not approved the drug, the drug company Biomarin, say they can no longer make it available free to the girls.

“Grace is due to have her final infusion in Sligo hospital on Thursday,” explained Barbara Frow McIntyre from Aughavas.

She said her daughter is the same size as a five year old because of the condition. She and her husband Padraig were making this trip to the Dáil for the second time in just 10 weeks, as they want to spell out how their daughter’s condition will deteriorate if she cannot access the drug.

“You are frightened all the time when your child has this condition. But the drug meant that Grace hasn’t been getting chest infections all the time and she is pain free. I think taking it away from her would be a crime against humanity”.

Sinn Féin TD Martin Kenny who is a neighbour of the family, said it was ironic that the treatment is manufactured in Ireland, and is exported to countries all over the world, where it is approved.

The National Centre for Pharmacoeconomics (NCPE), assessed the drug last year and found that it was not cost effective for the treatment of Morquio Syndrome.

Deputy Kenny said he believed a further review was carried out following the submission of further clinical evidence. “We don’t know the conclusion of that review but we are keeping our fingers crossed” , he said.

The Sinn Féin TD said: “Isn’t it ironic that a company making this treatment in Ireland, employing people in this country are allowed to export to every other country in the world but it cannot be approved here”.

The TD said he believed only three children and a small number of adults were affected in the Republic. The drug is available in Northern Ireland.

The girls began taking it in 2011 as part of a clinical trial. The drug is reported to cost €400,000 per person annually but Ms Frow pointed out that the HSE had approved it for one Co Monaghan child under the Treatment Abroad Scheme because of an administrative error.

“You have to ask why other countries have been happy with the clinical evidence but not here,”she said. “The worst thing is Grace understands what is happening and is under stress . You wonder ‘God how can they do this to children’.”

Despite visiting Leinster House they did not get to meet Mr Harris and no meeting is planned.

The HSE confirmed it had received a new application from Biomarin in December. That application is due for consideration at the next HSE leadership meeting, a spokesman said.