Snow on the way as weather warning issued 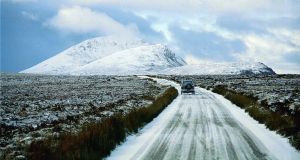 Scattered snow showers are expected across the Republic on Thursday night with temperatures set to plunge to as low as -2 degrees.

Met Éireann has issued a nationwide status yellow warning for snow and ice. It is valid from 9pm on Thursday until 9am on Friday.

The forecaster said there would be “scattered snow showers” but accumulations of less than 3cm. The showers will be more frequent in the west and north of the country.

“It will become much colder this evening and early tonight as winds freshen and turn northwesterly in direction and temperatures drop to between -2 and 1 degree,” it said.

“Widespread showers will be wintry with some snow accumulations, especially in the west and northwest of the country.” There is also likely to be frost and icy stretches on roads.

Following a “frosty start” to Friday, the day will be bright and cold with wintry showers becoming more isolated and many places enjoying long dry periods.

The outlook is “cold and unsettled”, with some further wintry showers, frost and ice heading into the weekend. It will however be less cold on Saturday but with spells of wet and windy weather.