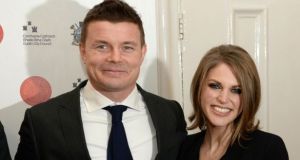 Brian O’Driscoll and Amy Huberman have been given permission to go ahead with revamping their home following a decision by An Bord Pleanála.

The planning board approved the renovation of their €1.8 million home at Palmerston Road, Rathmines, Dublin, despite concerns raised by their neighbours.

The green light has come more than a year after the couple lodged plans with Dublin City Council, in January 2017.

The council granted planning permission last July, but the plan stalled after next door neighbours, Donald and Isabel Fitzmaurice, lodged an appeal against the decision.

The appeal had complained that “the scale of the proposed development” and its effect in multiple locations would have an “adverse impact on the character and amenity” of the Fitzmaurice’s property.

The revamp of the O’Driscoll-Huberman house includes a new three-storey rear extension to replace the existing “non-original” two-storey extension and a new single-storey side and rear extension.

Mr O’Donnell also took issue with a statement by planning consultants for the couple stating the Fitzmaurices were consulted throughout the design stages “and are satisfied that appropriate measures have been taken to ensure that the proposal will not result in the dis-amenity to their property”.

In the appeal, Mr O’Donnell stated: “We would like to correct this statement. While some consultation did take place, the applicants in the end, declined to amend their scheme to accommodate the concerns of my clients in relation to the extent of the proposed development.”

However, the appeals board inspector in the case, Karen Hamilton, who recommended that planning be granted. placed little weight on the arguments put forward on behalf of the Fitzmaurices.

In her 18-page report, Ms Hamilton stated she did not consider the O’Driscoll-Huberman proposal “would have any significant negative impact on the residential amenity of the residents of any adjoining property”.

She said this conclusion was based on the location and orientation of the site and the design and layout of the proposed rear extension.

In its formal order giving the project the go-ahead, the board stated the proposed development would not seriously injure the residential amenities of the area or of property in the vicinity.

It also found the proposal would not have a negative impact on the character and setting of a protected structure or the conservation area and would not endanger public safety by reason of traffic hazard.