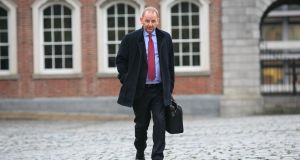 The current sitting of the tribunal is examining whether a false sex abuse allegation or any other unjustified ground were used at the confidential hearings of the 2015 O’Higgins Commission by the Garda Commissioner Nóirín O’Sullivan, to discredit Sgt Maurice McCabe. Photograph: Collins

The chairman of the Charleton Tribunal, Mr Justice Peter Charleton, has queried whether there was “any basis” for the Oireachtas asking him to investigate the matter he has been hearing evidence about since January 8th.

The current sittings of the tribunal are examining whether a false sex abuse allegation or any other unjustified ground were used at the confidential hearings of the 2015 O’Higgins Commission by the Garda Commissioner Nóirín O’Sullivan, to discredit Sgt Maurice McCabe.

The module or series of sittings began on Monday January 8th and came to an end on Thursday save for the taking of evidence from Sgt McCabe, who is to give his evidence at a later date. The tribunal has access to the commission transcripts.

Mr Justice Charleton has asked that the parties before the tribunal address him in submissions on eleven questions, including whether there was “any basis” for asking the tribunal to examine the O’Higgins Commission issue or whether the question put was “based entirely on leaks and conjecture”.

The tribunal has now adjourned and is expected to resume hearing evidence in a few weeks.

Controversy over the treatment of Sgt McCabe by Ms O’Sullivan at the O’Higgins Commission hearings erupted in May 2016, after the commission had reported, when media reports based on leaks from the confidential hearings suggested that at a time she was publicly expressing support for Sgt McCabe, Ms O’Sullivan was attacking him behind closed doors.

Mr Justice Charleton said it appeared clear that everyone agreed, in relation to whether there was an attempt to rely on a false sex allegation against Sgt McCabe, that “no, there wasn’t”.

The tribunal has heard a false allegation was levied against Sgt McCabe at the commission hearings by way of a letter from Ms O’Sullivan’s legal team dated May 18th, 2015. Mr Justice Charleton asked what evidence there was that this was a mistake, an “uncorrected mistake” that was left uncorrected, or “deliberate ab initio”. There was also the question as to what this had, if anything, to do with Ms O’Sullivan.

Another question was whether there was evidence of a “dark truth” that it was decided at the “apex” of the Garda organisation to “go after” Sgt McCabe at the commission, Mr Justice Charleton said.

Another question that would have to be considered was whether the Department of Justice and its then minister, France Fitzgerald, were behaving lawfully in 2015 in leaving any question as to the legal strategy being adopted by Ms O’Sullivan at the commission, to the then Garda Commissioner.

Earlier, in evidence to the tribunal, Chief Supt Tony McLoughlin said he had no memory of his line manager, director of Human Resources John Barrett, telling him in 2015 that Garda HQ had decided to “go after” Sgt McCabe at the commission.

Mr Barrett had earlier told the tribunal that he was told in 2015, prior to the beginning of the commission hearings, by chief administrative officer Cyril Dunne, that “we are going after” Sgt McCabe at the commission. He also said he had mentioned the matter in the weeks afterwards to Chief Supt McLoughlin, and that Chief Supt McLoughlin had more recently confirmed this.

Mr Dunne has denied making the comment. Mr Justice Charleton has described it as “a very serious allegation” indicating that a group of four people at the top of the Garda had decided on such a strategy. Mr Dunne said the executive of the Garda Síochána never discussed the legal strategy to be pursued at the commission.

When the tribunal resumes hearing evidence, the chairman said, it intends to hear evidence on all the remaining modules. These include whether a smear campaign was directed against Sgt McCabe by senior Garda management.