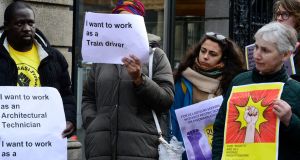 Part of the demonstration for the unrestricted right to work for asylum seekers outside the Dáil .Photograph: Cyril Byrne

New regulations allowing asylum seekers work in limited circumstances, coming into force on Friday, were a “horrific joke” and “extremely disappointing”, a protest outside Leinster House heard on Thursday.

About 150 people gathered to support a call, made by asylum seeker and migrants groups, for an unrestricted right to work for asylum seekers.

From Friday, under a “temporary measure” asylum seekers can apply for an employment permit under the Employment Permits Act 2003. However, normal fees and conditions will apply. This means applicants will have to pay between €500 to €1,000 for a six-to-12-month permit. Currently asylum seekers in direct provision have a weekly allowance of €21.60.

According to the new rules, they must secure a job that pays a starting salary of at least €30,000 per year and may not work in any of 60 different sectors, including in hospitality, food, healthcare, social work, childcare, marketing, administration, textiles, printing, housekeeping and construction.

The move to permit asylum seekers work follows a Supreme Court judgment last May in which a Burmese man, who had spent eight years in direct provision before getting refugee status, unanimously won his appeal over laws preventing him working here before his status was decided.

The seven-judge court unanimously agreed the absolute ban was “in principle” unconstitutional but adjourned making any formal orders for six months to allow the legislature consider how to address the situation.

The new scheme, which will be in force until a full work-permit system is drawn up for asylum seekers, appeared to conform to the Supreme Court ruling but would have the effect of continuing asylum seekers’ exclusion from the work-place, the protest heard.

Also represented were the Movement of Asylum Seekers in Ireland, the Immigrant Council of Ireland (ICI), the Irish Refugee Council, the Migrant Rights Centre of Ireland, United Against Racism (UAR) and the Anti-Racism Network.

Kumbulani Phiri (33), from Zimbabwe has been in Ireland for four years. He is studying a pre-nursing course and is being funded by an asylum-seeker support organisation. He would like to work as a carer.

“When I heard last year we would be allowed to work I was over the moon, I was going to be able to give back to this society, to give back to the community, to pay for my own food. When I looked and saw the specific jobs we cannot work in, I thought, ‘Now this is not giving us anything’. I was so angry, so upset.”

He describes living in direct provision, where accommodation and food are provided with a weekly allowance, as “killing your mind”.

At the end of 2017 there were 5,096 men, women and children, including 801 families, in the 34 direct provision centres across 17 counties in Ireland.

Memet Uludag of UAR said the new scheme was “not a solution”.

“It is a problem. It is a horrific joke played on these people. It is bad for business and it is bad for society,” he said. He called on the trade-union movement to take up the issue.

The ICI said the scheme was “extremely disappointing” and made a “mockery of the Supreme Court ruling.

“As the Irish Government has not yet mapped out the criteria for access to employment when it comes into effect, we urge in the strongest terms for practical solutions which actually allow asylum seekers to seek fulfilling and effective employment.”