Police in Malaysia have widened their search for Nora Quoirin, a teenager believed to be travelling on an Irish passport who went missing from a holiday resort, adding that they had found no evidence she was abducted. 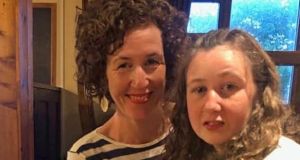 Meabh Quoirin with her daughter Nora Quoirin who has vanished while on holiday in Malaysia. Photograph via PA/Wire

The family of missing 15-year-old Nora Quoirin have said they believe she has been abducted.

Nora is the daughter of an Irish-French couple who have lived in London for about 20 years. She vanished while on a family holiday at the Dusan resort in a nature reserve near Seremban, about 63km south of the capital Kuala Lumpur on Sunday.

On Tuesday the family said they are “especially worried” because Nora has learning and developmental disabilities and “is not like other 15-year-olds. She looks younger, she is not capable of taking care of herself, and she won’t understand what is going on. She never goes anywhere by herself. We have no reason to believe she wandered off and is lost, they said. Nora has shoulder length wavy dark blonde hair and blue eyes, she is 5ft 1in and thin. If you have any information, please pass it on so we can assist the local police in any way possible.”

The family has set up an email address for any information that could help with her return at findnoraq@gmail.com.

The Lucie Blackman Trust (LBT) has also provided a hotline and email address for information. People can remain anonymous and call +448000988485 or email ops@lbtrust.org.

Nora’s father raised the alarm when he discovered her missing from her bedroom at 8am local time on Sunday. Her window had been opened.

What do the police say?

Malaysian police have said there are no signs of foul play in the disappearance of the girl. But they have expanded the search for Nora, with more than 160 personnel now looking for the teenager, local media reported.

Those searching dense jungle and hilly terrain on foot and by helicopter include police, the fire and rescue services department, civil defence and the forestry department.

Sniffer dogs are also being used in the search. Police said local indigenous people – known as Orang Asli – are also helping with the search. Negeri Sembilan police chief Mohamad Mat Yusop said on Tuesday that there was no evidence Nora had been abducted.

“We have no clues, no evidence to say this case is abduction,” he said. “We will do our very best. We will not give up hope. We believe that she didn’t go far and that she had lost her way.”

He said that sniffer dogs had picked up the teenager’s scent within 100m from her resort bedroom but the trail stopped there.

He added that the girl’s mother reported that she was only in her underwear when put to bed. But it is unclear if she was dressed when she disappeared.

Villagers who joined in the search expressed concern over Nora’s fate.

“This particular jungle, for outsiders, they don’t know how to navigate, they get lost. Natives like me, we are used to this jungle,” said Bali anak Akau.

Haanim Bamadhaj, a resort spokesman, said the Dusun management is baffled by her disappearance.

Resort staff and even some guests had earlier joined in the search, she said.

“Our resort has been operating for 10 years and we have never even been robbed. We are doing our very best and praying hard,” she said.

Following Nora’s disappearance, she said some guests had cancelled their bookings and that the resort had provided full refunds.

Nora’s aunt, Aisling Agnew, told the LBT from Belfast: “Nora’s parents and relatives in Ireland and France are distraught by her disappearance. Nora is a child with special needs . . . and we fear for her safety . . . We now consider this a criminal matter. We are appealing to everyone to assist the local police in any way they can and to pass on any information that would help locate our beloved Nora without delay.”

A gofundme page set up to help family members to travel to Malaysia to participate in the search and rescue effort has already exceeded its target of €6,500. Thus far more than €21,754 has been donated. – Additional reporting PA