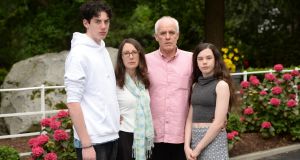 A family who were separated from the ashes of their loved ones on an Aer Lingus flight to Dublin are to be reunited with the remains just three hours before a planned memorial service on Wednesday morning.

Bob Gilmour (63) had travelled from Australia with the remains of his parents to fulfil their wishes of being laid to rest in their Irish and English birthplaces.

When he landed in Dublin on Saturday off a flight from Italy, he made the grim discovery that his luggage, and the ashes, were nowhere to be found.

However, after a scramble by Aer Lingus staff to locate the bags they were finally found on Tuesday at Milan’s Malpensa Airport where they had been forgotten by baggage handlers.

Speaking to The Irish Times on Tuesday night after the four-day saga had finally come to an end, Mr Gilmour said a massive weight had been lifted from his shoulders.

“It feels great,” he said of the prospect of being able to scatter his father’s ashes over his grandparents’ grave in his hometown of Ballymena, Co Antrim.

“I know it’s what he wanted. Whatever kind of view anybody has of spirituality or religion I am sure he will be at peace knowing that he is at home with his mum and dad.”

Sam Gilmour met his wife Marjorie who was from Birmingham while serving in the Royal Air Force during the second World War. They later married and in 1967 emigrated with their 11-year-old son Bob to Australia.

Before their deaths, the couple said they wanted to have their remains brought back to their respective home countries and scattered on family graves. So when Bob Gilmour’s youngest daughter was offered the opportunity to train at a ballet school in Italy the family seized the opportunity.

Mr Gilmour said that, having parents who met during the war, he learned to take everything in his stride, even if the events of the last few days were a particular challenge.

“Honestly my dad would be laughing his head off,” he said of the drama as it unfolded.

On Wednesday morning a few close family members will gather around the Ballymena graveside to say their final farewells and mark Sam Gilmour’s eventual return home from Australia.

An Aer Lingus spokesman said the baggage would arrive overnight into Dublin Airport where it would be immediately transported to the family – Mr Gilmour said it would arrive in Ballymena at about 8am.

“We sincerely apologise for the inconvenience caused,” the spokesman said.

Before leaving Tasmania the Gilmour family organised services for Bob’s parents with the help of family and friends – Ballymena on Wednesday and Birmingham on Friday.

“We arrived in Dublin from Milan with Aer Lingus on Saturday. Getting through customs was another hour-and-a-half process. We then got to the Aer Lingus carousel to learn that all four of our bags had been lost.”

As a consequence of the confusion, the family had to cancel planned trips to Cork and Galway before making the trip north for the service in Ballymena.

Aer Lingus, according to its website, allows passengers to carry ashes contained in an urn as either checked or cabin baggage.

“The undertaker or funeral director must ensure that the urn is secured in a padded, leak-proof container that is not made of metal, as it must pass through an X-ray machine,” it says.

“The urn is then part of your normal baggage allowance. You must be in possession of a death certificate and cremation certificate to be allowed carry ashes on board.”