The first ever licensed excavation of a second World War US fighter plane in Ireland has taken place in Monaghan. The P38 Lightning crashed into a Castleblayney field after pilot Second Lt. Milo E. Rundall bailed out in December 1942. Video: Bryan O'Brien 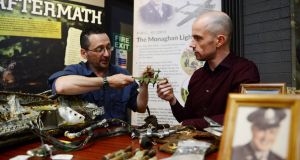 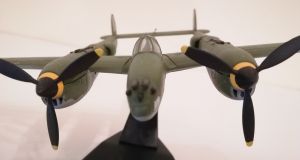 Model of a WW2 P38 Lightning aircraft similar to the one that crashed in a Castleblayney field in 1942. Photograph: Bryan O’Brien/The Irish Times 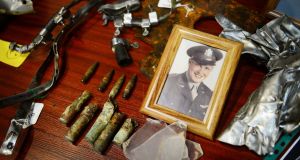 Parts of a fuel tank, a dozen bullets and a small cockpit bulb lens were among the finds of an excavation of a second World War US fighter plane from a Co Monaghan field.

The plane, a P38 Lightning aircraft, crashed into the Border field after the pilot lost his way and began to run low on fuel on December 17th, 1942.

The excavation of the aircraft took place in recent weeks in a field near Castleblayney. A dig team – including Queen’s University Belfast surveyors and pupils from Foyle College in Derry and Ballybay Community College in Co Monaghan – retrieved the remaining parts of a twin-engined fighter.

The project was done with Monaghan County Museum, where the findings of the dig will be showcased.

Dig organiser and aviation historian Jonny McNee told The Irish Times the plane model was the “American equivalent of the spitfire”.

During the dig, the team found a large part of the fuel tank two or three feet underground, which Mr McNee said was a “great key find”. The group also recovered a dozen bullets and a lens from a bulb in the cockpit.

The US pilot – Second Lieut Milo E Rundall (22) from Iowa – bailed out successfully after he got lost on an evening flight from Langford Lodge, on the eastern shores of Lough Neagh in Northern Ireland.

He was returning home to his base with the 82nd Fighter Group, which was based at US Army Air Station 344 at Eglinton in Derry, now the City of Derry Airport.

He later took part in the Allies’ North Africa campaign against Germany but was shot down and taken prisoner in January 1943. After the war he returned to his hometown in Iowa and died in 2006.

Irish Defence Forces personnel recovered most of the wreckage in 1942. But licensed ground-penetrating radar surveys undertaken by the project team along with both schools in earlier this year revealed not all the aircraft was recovered at the time.

The team were granted the necessary archaeological licences by the Department of Culture, Heritage and the Gaeltacht and the National Museum of Ireland to legally dig and preserve the recovered remains.

“We know from doing the dig and searching the historical documents there was not an awful lot of the aircraft left after the Irish army took it away, so we had to manage the expectations of the pupils,” Mr McNee said.

The pilot would have been running low on fuel at around 7pm, and, with Northern Ireland observing a blackout during the war, found himself in difficulty navigating his way back to base, Mr McNee said.

A board of inquiry into the crash found Second Lieut Rundall had taken off without maps of the area and ruled 70 per cent of the cause of the crash was his fault, he said.

Liam Bradley, curator of Monaghan County Museum, said the results of the dig would be put on show in the coming weeks.

“We feel it’ll make a great addition to our wonderful story of Monaghan during World War Two,” he said. - Additional reporting PA