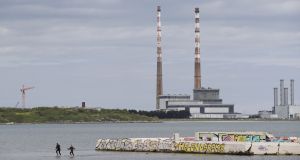 A scheme to infill Dublin Bay for housing, including part of Sandymount Strand, was proposed by Patrick Abercrombie 100 years ago. Photograph: Nick Bradshaw for The Irish Times

Building on Dublin’s Sandymount Strand and the Tolka Estuary could provide enough homes for 150,000 people, the president of the Royal Institute of the Architects of Ireland (RIAI) has said.

David Browne, a director of RKD Architects, said the beach and estuary lands should be reclaimed from the sea for dense, sustainable apartment neighbourhoods, which would provide affordable homes over the next 50 years.

A scheme to infill Dublin Bay for housing was proposed 100 years ago in a plan for the city which was chosen following an international competition.

We need to stop expanding Dublin and densify it instead. When the tide goes out there is a vast area of land there

However, while elements of Dublin of the Future, the New Town Plan, by Patrick Abercrombie, did go ahead, such as the development of Cabra and Crumlin, the Sandymount Strand and Tolka Estuary projects were abandoned in favour of the westward expansion of the city, Mr Browne said.

“The approach of successive Irish governments to the Abercrombie plan was to cherry pick bits of it. The attitude was, ‘We have loads of land so let’s just keep going,’ and look at what we’ve ended up with.”

While Abercrombie’s housing plans were based on the Victorian “garden city” model of low-rise, low-density housing, the principle of reclamation to keep new development close to the city remains valid, Mr Browne said.

“We need to stop expanding Dublin and densify it instead. When the tide goes out there is a vast area of land there and even if we just take some of it, it would be a huge benefit for the development of Dublin, we would still be able to keep a lot of the beach for a beautiful maritime park.”

On the southside of the bay an area stretching from the Poolbeg peninsula to Seapoint in Blackrock could be utilised, while on the northside lands south of Clontarf and north of Dublin port at the mouth of the Tolka river could be reclaimed.

“Abercrombie’s idea was very much at the garden city level, and that was the model we followed from the 1920s on. I would be of the opinion that we can’t go on like that. Here we have an opportunity to achieve greater density and height. The Tolka estuary could take a population of at least 50,000 and Sandymount up to 100,000.”

A general height profile of four to six storeys, with some eight-storey buildings and a limited number of taller landmark buildings, would achieve the required density, he said.

Land reclamation has successfully been used to address housing shortages in several northern European cities, Mr Browne said, and would allow Dublin to plan for its future housing needs through “compact urban expansion” close to the centre of the city.

“It’s been done in Nordhavn in Copenhagen, where they filled in the archipelago areas over the mouth of the river; in Hammarby Sjöstad in Sweden, and of course the Dutch are the experts in reclamation.”

There were, he conceded, environmental issues which would have to be addressed before any reclamation could be pursued, but these were not insurmountable and needed to be weighed against the environmental problems of sprawl.

“We needed to plan now for the filling-in of Sandymount Strand and the Tolka estuary, rather than just building on an ad hoc basis for the next 50 years and pushing the population further and further out from the city.”