About 1,600 horses and ponies will participate in show’s various equestrian events 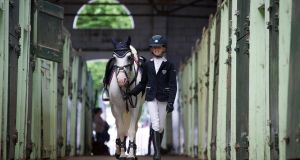 Lauren Murphy (11) from Glasson, Co Westmeath leads her pony Taggert Express before the launch of the 2018 Dublin Horse Show at the RDS in Ballsbridge. Photograph: Tom Honan

More than 100,000 people are expected to attend next month’s Dublin Horse Show at the RDS, the organisers have predicted.

About 1,600 horses and ponies will participate in the show’s various equestrian events, including the Nations Cup or, to give it its official name, the Longines FEI Jumping Nations Cup, while the Horse Show itself is this year officially branded as the Stena Line Dublin Horse Show.

The Nations Cup will be the first home outing for the Irish show jumping team, who are the current European champions. They will be competing against teams from Mexico, the United States, France, the Netherlands, Britain, Italy and Switzerland.

The show costs the RDS €4.9 million to stage but, as spokesman Diarmuid Hanafin noted, while models posed and ponies trotted around Ring 2 of the Ballsbridge arena for the benefit of photographers, the whole event, redolent as it also is with fashion and glamour, “plays an important role, socially and economically, for rural Ireland”.

As if to underline that point, a report published on Wednesday by economist Jim Power – Untapped Potential: Unlocking the Economic Potential of the Irish Sport Horse Industry – said the sector could create an additional 7,000 jobs over the next decade.

The report noted that in 2016 the thoroughbred breeding and racing industry accounted for direct and stimulated spending of some €1.84 billion. It said it is “a very broad and diverse sector” consisting of many different activities, individuals and businesses.

“The current sport horse population is estimated at 135,715 animals; there are 14,830 active breeders; 46,799 people are involved with sport horses; there are 14,057 full-time job equivalents in the sector and it makes a contribution of €816 million per annum to economic activity,” it said.

However, it warned the sector was being prevented from expanding because of “the lack of a clear strategic plan and a properly resourced governing body; the fragmented nature of the industry; the failure to recognise the tourism potential of the sector; top riders and breeders being forced to leave the country; the lack of adequate top-quality facilities and competitions; the lack of adequate prize money, logistical costs; promotion of the sport; breeding issues; and Brexit”.

Mr Power suggested there was “every reason to believe” that with “proper funding and management structures” the sector could increase by at least 50 per cent in a decade.

“This would translate into an increased contribution of over €400 million to the economy and an additional 4,800 direct jobs and 2,000 indirect jobs. The export contribution should be capable of being doubled from €48 million,” said the report.

The success of the thoroughbred sector showed what can be achieved with adequate funding, proper structures and “a unified strategic vision”, Mr Power said.