Wind is changing for offshore energy

Falling costs and technological advances mean that offshore wind farms are once again a viable, and economic, option 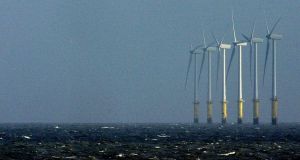 In early 2002, the Government signed off on Ireland’s first offshore wind farm. It would be the world’s largest, a 520 MW giant of power generation, expanding up to 200 turbines across 27km of sea off the Wicklow coast.

Today, the Arklow Bank has just seven of those turbines and remains Ireland’s only offshore wind farm. From 2004, offshore increasingly lost out to its onshore competitor, which was much easier to do.

“It was much more attractive from a cost point of view. It could deliver at the scale that was needed at a price that was affordable,” explains Dr David Connolly, chief executive of the Irish Wind Energy Association (IWEA), the umbrella group representing both sides of the industry.

However, things are changing, again. Today, offshore is beginning to cost a lot less. Offshore developers need ports, ships and expensive crews qualified to drill into the seabed. In recent years, the costs of each have fallen. Once again, offshore wind can look, literally, to the horizon.

Technological change means that offshore turbines are bigger and more efficient, so fewer are needed. Meanwhile, they are not crimped by a lack of space, and they escape the kind of planning rows provoked on land from annoyed neighbours.

“The number of projects would be low but the scale of the projects is huge,” explains Dr Connolly. “To make them economically viable, you need to do them at scale. You are working out at sea and you have the opportunity to do that.”

Today, between three and five offshore wind farm developments are in the pipeline, all at different stages. Not all of them have financing in place, it is believed, while investors are waiting to see the colour of the Government’s support.

Of those in the pipeline, the Oriel Wind Farm is the most advanced. Based off Co Louth, its 55 turbines will deliver 330 MW of energy, enough to power 250,000 homes, becoming the ninth largest power-plant in Ireland.

Last year, the project secured investment from Belgian-based Parkwind, one of Europe’s leading wind farm developers. While its size was not disclosed, the overall cost of the scheme is thought to be as high as €600 million.

Offshore wind farms could generate up 500 MW. The IWEA believes offshore energy requirements could be supplied by fewer than 10 wind farms, each with about 50 turbines, so the prospect of endless coastlines punctuated by white windmills is unlikely.

In March, the IWEA said the Government should set an ambitious target of reaching 70 per cent renewable electricity by 2030. However, regulatory certainty is needed not only to get the wind farms built, but to get them built them in time.

Developers, they argue, need to get early-stage State supports, simpler planning rules, guaranteed and simplified rules governing their access to the electricity grid. In the face of industry complaints, changes are afoot.

“Right now there is no regulatory policy in place to say how an offshore wind farm gets that grid connection,” Dr Connolly says, insisting projects that have already been granted planning permission must be able to hold onto it, even if the rules change.

In 2014, the Government published its Offshore Renewable Energy Development Plan, which was updated last May. Its overall finding was that offshore wind should achieve up to 4,500 MW without “impacting significantly on the environment”.

“Offshore wind energy has reached the commercial stage,” the Department of Communications, Climate Action and the Environment said. “We note the continued falling costs of renewable technologies such as offshore wind and solar PV.”