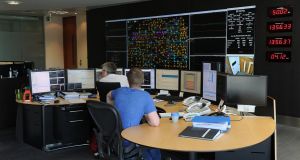 The nerve centre of the Irish energy system is a quiet room at EirGrid’s headquarters on Dublin’s Shelbourne Road , where large screens on a wall track every flicker in demand.

Each of the island’s power stations, some using oil, others using gas, coal, or hydro, are colour-coded, including those in Northern Ireland: each are monitored second-by-second.

The map of the island’s major 400-kilowatt transmission lines display the population bias favouring the eastern parts of the Republic, with most concentrated in, or around, the greater Dublin area.

Meanwhile, the screens tell the story of wind energy, too, the links to Scotland and onto Europe through interconnectors and display the direction in which the power is flowing.

Black arrows indicate flow of electricity on EirGrid’s 162km-long east-west submarine interconnector between north Co Dublin and Barkby Beach in Prestatyn in Wales, and another between Antrim and Ayrshire in Scotland.

Meanwhile, red lines show the power lines out of service for maintenance – the vast majority of it will be long-planned in advance; the unscheduled is avoided.

Electrical engineers, such as NCC real-time operation lead Simon Tweed, match electricity production to customer as it varies by the hour, by the week, by the season.

Electricity must be produced to meet demand – it cannot be stored, Tweed and his colleagues work to ensure the system is stable 24/7, 365 days a year.

A near-identical control centre exists in Belfast, which is operated by EirGrid’s sister company, the prosaically-named System Operator for Northern Ireland (SONI).

EirGrid is responsible for the power lines above 110 kilowatts in the Republic, while the ESB runs the delivery of electricity in the form of the 240-volt lines that bring electricity into millions of sockets in homes and businesses, he points out.

Consumption varies throughout each day. The weather plays its part: the recent heatwave meant little wind power was being generated, while air-conditioners drove demand.

The NCCs in Dublin and Belfast plan continuously for unforeseen events, ready to increase the supply of power from a variety of sources to meet changing demand.

“As well as running the power system, we are running the market,” says Tweed, explaining the pricing of electricity on offer from the power producers.

Wind is the biggest variable in the system. Depending on weather conditions, there may be large volumes available. However, there are times when its use has to be limited.

Renewable energy, mostly from onshore wind farms, accounted for nearly 30 per cent of all electricity generation during 2017, shy of the 40 per cent EU target set for 2020.

New sources of power are constantly being added to the grid. Last year, EirGrid connected 27 windfarms to the all-Ireland grid last year. So far, it has connected 4,000 megawatts (MW) of wind turbines.

The highest all-island demand for electricity ever recorded is 6,878 MW, which leaves open the possibility that all of the island’s demands could be met by wind alone – if rarely.

Strong economic growth and a rising population means demand will inevitably rise, with much of it coming from offshore wind – which EirGrid predicts will grow by 3GW by 2030.

Under its DS3 programme, EirGrid has worked to ensure it can securely operate the power system with increasing amounts of variable renewable generation over coming years.

Already, it is a world leader in the subject. Due to its proven expertise, it was asked to lead a pan-European Eu-Sysflext research programme into the deployment of renewables.

Besides supplying extra sources of power, EirGrid is working to ensure that the power that is used is used as efficiently as possible, and at the right times.

EirGrid and SONI run a successful demand-side management programme for businesses across the island, which will soon be rolled out to consumers.

Efficient customers gain significant benefits from reduced bills and greater control over the energy they use and produce. In turn, it helps EirGrid manage the power system efficiently.

For domestic customers, “Power Off and Save” is an initiative which EirGrid is already running with Electric Ireland on a pilot basis – which offers rewards to people who cut their energy use when demand is high.

Battery storage increasingly appears to be a technology that can play a key role, especially in supporting the operation of the grid, according to EirGrid chief executive, Mark Foley.

Lumcloon Energy is to spend €150 million developing Ireland’s first two battery storage centres in the midlands, which will store renewable energy generated at night that would otherwise go to waste.