EirGrid is at the heart of an all-Ireland energy system, but it cannot rest on its laurels, its chief executive Mark Foley says 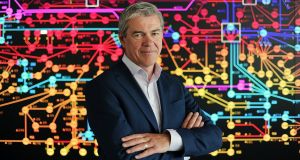 Leaving his post with the Dublin Airport Authority in 2008 after the construction of Terminal 2, Mark Foley believed the airport’s needs were sorted for 20 years.

Today, Foley, who now leads EirGrid as its chief executive, thinks differently about infrastructure. Challenges emerge quicker than before, fuelled by economic growth and a rising population.

The decarbonisation of the Irish economy which must happen over the next decade “is as big a transition as we have ever seen in the history of the State”, he declares.

In his new role, Foley is responsible for power supply through the island’s electricity grid, alongside SONI, EirGrid’s counterpart in Northern Ireland.

Over the next decade and more, fossil-fuel-generated power carried on the grid throughout the island – Brexit permitting – will be gradually replaced by a series of renewably-created supplies. Basically, Foley says, it is like replacing an oil-driven system with one powered by water, or wind, or biomass – and all the while keeping the network going and the lights on.

Progress is being made. Earlier this year, EirGrid reached a point where two-thirds of the power on the grid at any one time was from renewable sources. In time, it wants to take that percentage to three-quarters.

The significance may be lost on outsiders, but engineering teams from other countries are flocking to Ireland to see how “damn good engineers” managed “an extraordinary achievement on a world scale”, he says.

The achievement was driven by necessity: a new EU 32 per cent renewables target for 2030 means there is no room for complacency, especially when Ireland has fallen short of meeting a 16 per cent target for 2020.

“We have a long journey to go,” says Foley, but he sees encouraging signs: “If we were having this conversation a year ago, we’d be having it in the context of no national discussion”.

Since then, the Citizen’s Assembly has issued a call-to-arms. Taoiseach Leo Varadkar has stated his intention that Ireland would become a world leader in climate change, while the National Development Plan has put aside €22 billion in investment.

Though the Citizens’ Assembly is not filled with politicians, Foley believes its work will be mould-breaking in time, educating the broader public, for whom climate change has often up to now been intangible.

There is a new urgency on climate action, he suggests. Business may be a little ahead of the Government, but that is not “necessarily a bad thing because all signposts are pointing in the same direction”.

Electricity demand, however, is set to jump sharply. Much of this is fuelled by new power-hungry data centres that can require the same amount of electricity as a large town.

A significant proportion of this extra load will occur in and around already heavy energy-using Dublin. Meeting this growth in demand will require investment in the grid, Foley says.

Building data centres will embed already-established IT multinationals in Ireland, he says – while their power needs are predictable and constant and will create even stronger demand for renewables.

Everything will change for everybody, not just business in the years and decades ahead – including public and private transport, and the need for dramatically better-insulated homes.

Planning is now more important than ever, Foley adds. EirGrid has already plotted Tomorrow’s Energy Scenarios out to 2030. The next chapter will be ready in October.

Shorter-term power management on the grid is anticipated by EirGrid’s annual generation capacity statement – which Foley describes as a transparent “finger on pulse” exercise.

Public consultation is necessary, but not everyone will always be happy with the outcome

“Nobody has a silver bullet. So if you take renewables, there’s going to be room for onshore wind, solar, offshore wind, batteries,” Foley says.

On the grid, a combination of “interconnected technologies and solutions being really well managed together” will be needed to solve the problems of the future.

Public consultation is necessary, but not everyone will always be happy with the outcome, notes Foley, who faces stiff opposition against plans to build high-power lines from Meath to Tyrone.

Though EirGrid is not directly involved in dealing with housing or commercial buildings projects at planning stage, developers quickly approach it after they get planning permission.

Because of our island status, the other critical part of the complex jigsaw is interconnection; north-south, east-west (between the Republic and the UK) and from here directly to Europe.

Interconnectors act as “a safety relief valve” at times: “If you have loads of wind blowing and all of it is not needed, for instance, it’s really helpful if you can ship it off to France, ” Foley says.

The Celtic Interconnector from east Cork to France is planned to go live by 2025/2026, while the planned North-South Interconnector – currently subject to judicial review on both sides of the border – needs to be operational by 2021.

Backed by offshore generation, Foley argues there is a reasonable prospect of Ireland soon becoming a net-exporter of power in the years ahead.

The increased pace in energy transformation is already evident, even without full sight of State incentives. Progressive developers, he says, are starting projects in anticipation of clarity to come.

The National Planning Framework has set a “quite staggering” trajectory for Ireland under population and economic growth headings, he observes.

Such development will translate into immense demands for infrastructure and power. The reality of climate change has to be factored into that from the beginning.

“My ambition [for EirGrid] is that we set our stall in terms of how we are going to support, enable and facilitate that . . . We’re going to be world leaders in doing that, and we are not going to be found wanting.”