‘A lot of people genuinely care about the environment’

People can be nudged into doing their bit to save the planet, the SEAI believes 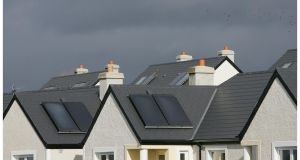 SEAI is bidding to make it easier to apply for energy-saving grants. Photograph: Bryan O’Brien

Most people, when asked if they would like to save their own hard-earned money while simultaneously doing their bit to save the planet would most likely answer yes. Why wouldn’t they? It is a win-win scenario after all.

But, as the Behavioural Economics Unit working with the Sustainable Energy Association of Ireland (SEAI) knows all too well, there is a big gap between agreeing with something and actually doing something.

The unit is looking at ways that that gap can be closed. The key to its work is recognising what makes us do certain things and what makes us not do them. We may, for example, disregard future savings if they take too long to recoup.

Or, curiously, we may fail to do anything if we are given too many choices, says the unit’s head, Karl Purcell: “People have to invest the money today for a benefit that they might not feel for 10 or even 15 years,” he says.

“Sometimes people look at that and say they don’t want to take the pain of the hassle of doing something now for a return on investment that is far away,” he adds. The SEAI grants available help to bridge that gap.

bills tell people how many units of energy they are using, but not how they compare to similar households

But the grants do more than that, psychologically: “We view grants as a social commendation of a particular act, or a particular behaviour and we tend to respond well to that,” he tells The Irish Times.

People also respond to feedback. Knowing exactly how much energy they are using encourages people to use less of it, he goes on, pointing out that energy bills can be hideously complicated and largely meaningless to most consumers.

The bills tell people how many units of energy they are using, but not how they compare to similar households: “So this socially normative comparison would tell you what the typical usage for somebody in a house of your size is and what your neighbours are using,” he says.

The comparison model is already being used by home-heat monitors such as Nest. Every month, they send users an email detailing how much energy they have used compared to the previous month and how that compares to the wider Nest community.

SEAI is bidding to make it easier to apply for energy-saving grants: “What we want to do is to take as much of the hassle away from the individual who is applying for a grant as we possibly can,” Purcell says.

Consumers who do make the switch to greener technologies do think altruistically about their energy usage: “We care more about others than you might think,” says Purcell.

Psychologically, people could get too much State help which would “take away the warm glow, the altruistic element”, so everything needs to be balanced, he goes on: “A lot of people genuinely care about the environment and altruism is a very important driver.”

However, there is fatalism, too, about the effect one individual can have. The US, India, China and other economic powerhouses are moving slowly to reduce carbon emissions, so what can the individual do?

“I think what we need to do is reframe the argument and focus on the local and on local communities so people will do what they need to do because they want their own community, or their own country, to be more green.”

They come in a foam-padded suitcase and include a thermometer for measuring the temperature of fridges and freezers, a humidity meter, a radiator key, a thermal leak detector and a plug-in energy monitor.

“We have talked to people who have used the kits and the feedback has been overwhelmingly positive,” Purcell says, adding that people love the thermal heat detector, which uses laser beams to allow people to check for leaks in their homes.

It works in a pleasingly simple fashion. You point the “gun” at a wall or a window or a door. If the laser beam turns blue, heat is leaking from that source. If it turns red, the area is excessively warm and if it is green you are good to go.