Industry’s failure to ditch coal a cause for concern

After years of decline, global coal consumption rose by 1 per cent last year 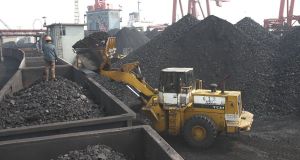 Coal being loaded for transport at a depot in Shanghai, China. Photograph: Qilai Shen/Bloomberg News

Coal is not yet dead. Energy giant BP’s chief executive Bob Dudley has declared his astonishment following disclosures that power companies use the same amount of coal as they did two decades ago.

Dudley has warned that the industry’s failure to ditch coal is causing real concern for the future, as latest figures show carbon emissions are on the rise again after three years of little or no growth.

And after several years of free fall, global coal consumption rose by 1 per cent last year. India and China’s building of new coal-fuelled power plants has helped fire the first increase in coal use for four years.

The stark figures depict a “pretty big backward step”, according to BP. Dudley says the power sector, which absorbs more primary energy than any other, has a major role in the backsliding.

More than a third of the world’s greenhouse gas carbon emissions from energy consumption come from power companies.

Despite the apparent push by administrations internationally to encourage a switch away from coal and to rapidly expand renewable energy in recent years, there has been no improvement in the power industry over the past 20 years.

“Astonishingly, the share of coal in 2017 was exactly the same as in 1998,” says Dudley. “The share of non-fossil fuels was actually lower, as growth in renewables has failed to compensate for the decline in nuclear energy. The failure to make any inroads into the power sector since the turn of the century should be both a cause for concern and a focus for future action.”

About 38 per cent of power generation still comes from coal.

Carbon emissions from energy consumption increased by 1.6 per cent – after little or no growth for the three years from 2014 to 2016.

Improvements in energy efficiency had been counterbalancing rising demand for energy.

Beijing’s bounce-back last year has been accompanied by a 3.1 per cent surge in energy use. Coal remains a major component of the densely-populated country’s fuel mix.

Earlier this year, environmental group Greenpeace estimated China’s carbon emissions rose 4 per cent between January and April this year and warned it is on course to record its biggest annual rise in emissions since 2011.

China has been the largest growth market for energy overall for the past 17 years. It pledged before the Paris climate change talks three years ago that emissions would peak “around 2030” and is moving to less carbon-intensive technologies.

The landmark agreement sets out a blueprint for halving carbon emissions globally by 2040 and reducing them to zero by the end of the century to combat the imminent threats from global warming.

“How much progress have we made in 20 years? None,” he says. Dale adds that the previous three years of “flat growth was a step in the right direction, but it wasn’t a big enough step.”

Natural gas was the largest source of energy growth, helped along by a massive programme of coal-to-gas switching in industrial and residential sectors in China. “But much more progress is needed,” says Dudley.

In the oil market, inventories are returning to “more normal levels” after a robust rise in demand last year, accompanied with production cuts by the OPEC oil producers group and other participating countries.

However, BP is warning the shale oil boom in the United States should serve as a caution that the recent firming in oil prices is “unlikely to persist”. The US leapfrogged Saudi Arabia last year to become the world’s second biggest oil producer after Russia.

Some observers believe it is on course to become the globe’s largest producer by as early as the end of this year.

Last year also showed improvements in the accessibility of gas around the world, with the strong expansion particularly of liquefied natural gas, or LNG, supplies. There is clear evidence that the major regional gas markets are becoming increasingly integrated.

“This greater accessibility and integration should help to underpin the long-term use of natural gas,” Dudley says. “Our industry operates and makes decisions at many different frequencies. Day to day, year to year, we need to understand how the markets in which we operate are changing and developing as new sources of supply emerge and demand evolves.

“Over the longer-term, we need to gauge the forces shaping the energy transition and ensure that we play our part in meeting the dual challenge of supplying the energy the world needs to grow and prosper, while also reducing carbon emissions.”

Dale says the road to meeting the Paris climate goals is likely to be “long and challenging, with many twists and turns, forward lurches and backward stumbles.”

“To navigate our progress will require timely, comprehensive and relevant data,” he adds.

Leaving Cert: Use of historical data would allow ‘good calculations’ of grades 01:43
Q&A: Covid vaccines – so what’s going to happen, and when? 01:12
Almost 300,000 essential therapy appointments missed in first half of year 01:00
Domestic violence is worsening amid Covid-19 pandemic, Garda figures show 01:00
Priority groups for Covid-19 vaccine to be decided next week 01:00