With an economy based largely on agriculture, Ireland is uniquely placed to to generate biomethane using farm waste 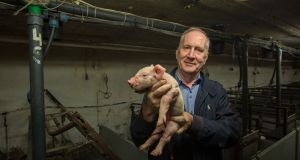 Biomethane will in coming years be generated at hundreds of sites around the country through the use of anaerobic digesters (ADs) and injected into the national gas grid.

Ireland is uniquely well-positioned to exploit this green gas. Farmers and the food industry in particular are set to play a key role in turning energy from waste, such as pig slurry, into heating.

Anaerobic digestion uses microbes to break down biodegradable material in the absence of oxygen. It generates biogas, which is combusted to generate electricity and heat, or can be processed into renewable natural gas (biomethane) and transportation fuels.

Currently, there are fewer than a dozen anaerobic digesters in Ireland, but Ian Kilgannon, innovation and business development manager with Gas Networks Ireland (GNI), says it is a proven technology and a low-risk investment.

Ireland is about to benefit from coming late to the game.

Outside of greater Dublin, the economy is largely based on agriculture, so hence the immense potential to generate biomethane using farm waste that farmers otherwise struggle to deal with.

However, it is more than that. GNI’s large energy users, such as those in manufacturing, pharmaceuticals and agrifoods, want renewable energy at the heart of their production systems – many are increasingly mindful of their corporate social responsibility when it comes to the climate and the environment, he adds.

In State policy terms, biomethane is about to be recognised for its role in decarbonising gas and addressing climate change challenges, and is expected to benefit from a State subsidy backed by major capital investment under the National Development Plan.

Biomethane has been on top on the GNI development agenda since 2014. After years of championing renewable gas, there is recognition now it can be produced at scale, be commercialised and bring added benefits. “It’s at the point of tidal change,” Kilgannon says.

It is estimated Ireland has potential for 900 AD facilities. GNI, which owns and operates the natural gas network in Ireland, plans to help facilitate 350 farm-scale ADs by 2030, which would deliver 21 per cent of our renewable gas target – a key element of commitments to reduce carbon emissions.

With farm wastes growing and dairying undergoing major expansion, the supply of feedstock is plentiful – most likely in the form of slurries, grass and a small amount of energy crops, provided they do not impact on food production, Kilgannon says.

In a prototype project, an injection point close the national grid is being built in Cush, Co Kildare. Green gas is to be put into the grid after purification from early next year, using the output of Green Generation’s AD in nearby Nurney. The gas will be transported by tanker to the central grid injection (CGI) point.

For those who dispute biomethane’s green credentials, Kilgannon says much clearer EU sustainability criteria apply on what’s acceptable. There are major cutbacks on use of palm oil in the offing and on so-called green fuels, “some of which were anything but”.

With Germany’s biogas industry on the wrong side of this stricter regime, it’s another advantage for Ireland coming late to biomethane production. The French and Danish approaches are more appropriate, and Ireland will pick the best combination, he says.

If Ireland maximises waste and agricultural inputs available, the biomethane produced would be equivalent to 28 per cent of natural gas usage today – enough to provide 100 per cent of the gas requirements of one million residential homes on the grid or close to it.

GNI plans to have 20 CGI sites in place over the coming decade, servicing an array of nearby farm-scale ADs – each processing about 35,000 tonnes of feedstock a year. Exact scale will be determined by State aid; probably by way of renewable-heat incentive scheme expected before or in Budget 2019.

GNI, which is part of the Ervia utility group, is a network company that transports gas primarily, but is expanding to become a gas logistics service, “a key enabler to support production”, Kilgannon adds. It is committing some €2 billion towards decarbonisation of Irish gas.

It is also developing a national compressed natural gas (CNG) refuelling a network of 70 stations that will provide countrywide coverage for larger vehicles and buses operating on Irish roads.

Tackling transport emissions will be a key element in the transition to a low carbon economy, Kilgannon says. CNG, and subsequently renewable gas, will play a major role in reducing emissions in the HGV and public transport fleet, he says.

Converting 50 per cent of buses and trucks to CNG would result in yearly fuel savings of €524 million over diesel and emission savings of 165,000 tonnes of CO2, rising to two million tonnes of CO2 a year if biogas is used.

Meanwhile, hydrogen is a “developing technology” and will be part of the energy mix in the long-term, and gradually replace biomethane, Kilgannon predicts.

Most new power-to-gas systems turn excess electricity into hydrogen and then methane (natural gas), which is burnt. This generates CO2, which is vented to the atmosphere – it needs to be captured to ensure the hydrogen is considered low-carbon.

Exytron in Germany has gone one vital stage further. It recirculates the CO2 from methane combustion in a closed loop. If this technology proves to be robust and becomes inexpensive, it solves many of the world’s remaining energy storage problems, while offering zero emissions heat and power.

Combining hydrogen with CO2 and converting the two gases to methane using a “methanisation” process which also generates oxygen is of particular interest, Kilgannon says. It’s a logical next step but is still at development stage but he believes it will be incorporated into some Irish projects within the next five years.