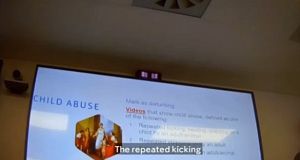 Facebook has been criticised for the way content moderators based in Dublin approached offensive and violent material. Photograph: Reuters

Minister for Communications Denis Naughten has expressed concern about serious shortcoming in Facebook’s approach to violent and abusive material on its site.

Speaking from New York on Wednesday the Minister said he was aware the company had failed to meet the standards expected by the public.

“I have sought an urgent meeting with Facebook management and this meeting is taking place here in New York on Thursday, July 19th.”

The shortcomings were revealed in a Channel 4 Dispatches investigation broadcast on Tuesday which showed trainee moderators at Facebook’s Dublin offices being told to leave disturbing content online.

Among the material was a video of a sobbing toddler being kicked and beaten by a man. Also a meme suggesting a girl whose “first crush is a little negro boy” should have her head held under water was left on the site despite complaints.

Mr Naughten said: “The programme raises serious questions for the company in respect of the manner in which it handles reports of harmful or illegal content; the internal procedures it has in place to moderate harmful or illegal content, and, the systems the company has in place to report instances of abuse, suspected abuse or other illegal activity to the appropriate authorities, including An Garda Síochána. ”

Facebook’s public policy manager of content, Siobhán Comiskey, said on Wednesday she knew people were “upset and concerned” by revelations , and said the company had taken “immediate steps” to address the issues raised.

The documentary involved covert filming over seven weeks at the company’s European headquarters in Dublin.

In it trainees were told the video of the small boy being beaten should be “marked as disturbing” (Mad) but not taken down.

One moderator filmed said: “If you start censoring too much then people stop using the platform. It’s all about money at the end of the day.”

The programme has led to renewed calls for far greater regulation of internet service providers, for the urgent appointment of a digital safety commissioner and for Facebook management to explain its policy.

Ms Comiskey said Facebook was “concerned” about what was shown in the documentary.

“We take the issue of people’s safety very seriously at Facebook. I’m the lead of the content policy team that serves Europe, the Middle East and Africa so my team is dedicated to keeping people on our platform safe.

“What we saw last night does concern us in the issues that it raised. We are taking steps immediately to rectify and inform people about what our policies are and how to properly implement them . . . Issues have been raised about how our policies are applied and what we are doing as we address those issues.

“We’ve already started to do that. We’ve already retrained the trainers that you saw on the show last night, to inform them how to properly apply our policies.”

The move by Facebook comes as Retail Excellence, the largest retail representative body in the State, suspended its relationship with the social network. Chief executive Lorraine Higgins said: “Based on the revelations from [the] Dispatches documentary . . . we have decided to suspend our partnership with Facebook until further notice”.

“As a representative body which promotes standards of excellence amongst retailers it would be wrong for us to continue our partnership where they have fallen short.

“On that basis, we will not be working with Facebook until we are satisfied their policies have been overhauled regarding the posting of violent and abusive content for commercial gain.”

Retail Excellence has partnered with Facebook to provide training to retailers to enhance their digital strategies through the platform. The next Retail Excellence-Facebook training course was scheduled to take place next week.

Facebook was also expected to address a Retail Excellence conference in September.

The Children’s Rights Alliance, the Irish Society for the Prevention of Cruelty to Children and CyberSafe Ireland all said the programme underlined the need for legislation to regulate internet service providers, saying self-regulation was insufficient.

At an event last week the Taoiseach Leo Varadkar said there was no need for such legislation.

“I think in fairness to the big tech companies, when I meet them they are very attuned to this issue. They know that failing to act when it comes to online safety is damaging their reputation and potentially damaging their shareholder value in the longer time,” he said.

“When [offensive or dangerous] content is reported they take it down very quickly. Some don’t, but that’s the kind of work they need to be doing . . . You can pass any law you like but the internet by its nature is the worldwide web, so companies have a global reach that domestic laws don’t have.”

Chief executive of Cyberspace Ireland Alex Cooney said: “The shocking revelation last night that a video of a man punching and kicking a toddler was deemed to be acceptable content by Facebook, has highlighted the ever growing need for regulation of online platforms.”