Cork to get new €5 million bridge in city centre

Bridge will be used by over 11,000 people a day to enter and leave Cork city 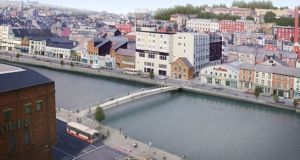 An artist’s impression of the new bridge planned for Cork

Cork is get a new €5 million pedestrian bridge across the River Lee which will be used by 11,000 people a day to enter and leave the city centre.

Work is due to start later this month on the Harley Street Bridge over the North Channel of the River Lee linking Merchant’s Quay with St Patrick’s Quay on the northside.

Lord Mayor of Cork, Cllr Mick Finn welcomed the plans for the bridge which, when fully operational in 2019, is expected will be used by 11,000 pedestrians and cyclists daily.

“The new bridge will greatly improve connectivity and convenience for the people of Cork - linking the city centre with the Victorian Quarter comprising MacCurtain St and surrounding areas.”

The bridge will be built by L & M Keating Contractors who recently completed the construction of the Pedestrian Bridge at Perrott’s Inch on the South Channel of the Lee near University College Cork.

A Cork City Council spokeswoman said the initial phase of work will consist of site set up and diversion of underground utilities on both Merchant’s Quay and St Patrick’s Quay.

The bridge itself will be fabricated off site by Thompsons of Carlow between July this year and February 2019 and the bridge section will be transported by truck for final assembly in Cork Harbour.

The finished superstructure will be placed on a barge and transported up river to the city centre in April 2019 when it will be lifted by crane from the barge in one overnight operation.

The barge journey will be timed to coincide with the optimum tide level for clear passage under Brian Boru Bridge and the installation will involve the closure of both quays during the operation.

Meanwhile work has begun on the €1.2 million repair and rehabilitation of St Patrick’s Bridge which link St Patrick’s Street in the city centre with Bridge Street on the city’s northside..

An under-bridge crane unit, one of three in the country,-is in place and will be used by Cumnor Construction to clean, re-point and repair the stonework on the 19th century heritage bridge.

Cllr Finn welcomed the restoration work, which is being carried out by Cork City Council in conjunction with Transport Infrastructure Ireland and is due to be completed by October

“We are delighted this restoration work is taking place and that such care is being taken to stay true to the design ideals of this bridge which opened in 1861 and is a key part of the city’s built heritage”.

Critical maintenance work has also begun on another of the city’s heritage bridges, St Vincent’s Bridge which connects the North Mall to the junction of Bachelor’s Quay and Grenville Place.