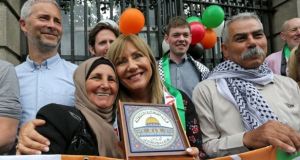 Israel’s foreign ministry sharply condemned the vote with spokesman Emmanuel Nahshon saying that “the Irish Senate has lent a hand to a populist, dangerous and extreme anti-Israel boycott initiative, effectively undermining the dialogue between Israel and the Palestinians.

“The boycott will affect the livelihood of many Palestinians who work in Israeli industrial zones, and they will be hurt by this initiative,” he added. “It will only cause damage to the diplomatic process in the Middle East.”

Ms Kelly had twice been summoned to the foreign ministry in Jerusalem.

She was summoned in January when the initiative was first submitted and insisted at the time that the Bill was not motivated by the BDS (Boycott, Divestment, Sanctions) movement.

Binyamin Netanyahu, Israel’s prime minister and acting foreign minister, reprimanded Ms Kelly, telling her that she was supporting those who seek to boycott Israel.

The ambassador was also summoned to the foreign ministry in April to be reprimanded over then lord mayor of Dublin Mícheál Mac Donncha’s participation in a symposium held in the West Bank city of Ramallah, and over two anti-Israel resolutions passed by Dublin City Council.

The Control of Economic Activity (Occupied Territories) Bill 2018 would make it an offence to purchase goods and services from Israeli settlements which have been condemned by Ireland and the EU as illegal.

The Palestinians welcomed the vote. “This courageous step builds on the historic ties between Ireland and Palestine, as well as it shows the way forward for the rest of the European Union, ” senior Palestine Liberation Organisation official Saeb Erekat said.

“The settlements are a war crime and must be treated as such,” they said. “The settlers are illegal occupiers. We are proud to have signed a letter in support of the Irish Bill and hope that the Bill will signal a new stage, where Israel will begin to pay an international political, economic and ethical price for its actions. This marks a new stage in treating the Zionist lobby as a lobby that is dangerous for the values that Europe pretends to uphold.”