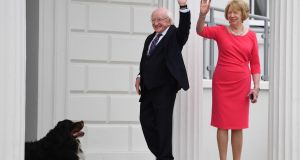 President Michael D Higgins and Sabina Higgins wave after they greeted the Duke and Duchess of Sussex after they arrived at Aras an Uactharain on Wednesday. Photograph: Joe Giddens/PA

Fine Gael will actively canvass for the re-election of President Michael D Higgins and may use party resources to assist his campaign.

Taoiseach Leo Varadkar confirmed the party would back Mr Higgins, who has confirmed he is seeking a second term in office.

The extent of the party’s campaigning has not yet been decided but Mr Varadkar indicated Fine Gael is willing to erect posters and use party literature to outline the party’s support for Mr Higgins.

Such discussions would be held with Mr Higgins, a former Labour Party TD, and his re-election team over the coming months, the Taoiseach added.

“In terms of putting party resources and party money behind the re-election campaign, we are willing to do that.”

Mr Higgins confirmed he will seek re-election to the office of President and is likely to face a contest.

However, he now has the backing of the two main political parties. At a meeting on Wednesday, the Fine Gael party was presented with three options - to field its own candidate, not participate in the election or support Mr Higgins.

Twelve people spoke at the meeting, nine spoke in favour of supporting President Higgins for re-election. No vote was taken as the party had agreed to overwhelmingly support Mr Higgins.

Asked if the whip would be applied to councillors, Mr Varadkar said this would be a matter for the national executive to consider next week.

However, he stated the position adopted by the Fine Gael parliamentary party was that the party should not support other candidates and be involved in the re-election campaign of Mr Higgins.

“My view is if Fine Gael decides as a party that we are going to support the President’s bid for re-election that we should do that in a wholehearted and meaningful way, “ Mr Varadkar added.

Meanwhile, former lord mayor of Dublin Christy Burke has said he is considering a bid for the Presidency.

“One of Dublin’s finest ever lord mayors and long-serving councillor, Christy Burke is considering throwing his hat into the ring to run for President of Ireland. The first thing on his agenda would be housing for all,” noted a statement on his Facebook page on Wednesday.

He was first elected to represent the north inner city on Dublin Corporation back in 1985 as a candidate for Sinn Féin before becoming an independent councillor in 2009.

In the last seven general elections, and in two byelections, he’s put himself forward as a candidate for the Dáil but was unsuccessful.