Sixteen-member committee to report before end of January 2019 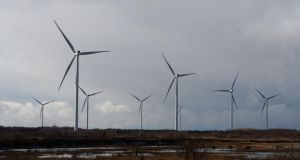 Mount Lucas wind farm in Co Offaly. The new National Energy and Climate Plan is due to be submitted to the EU by the end of the year and implemented in 2019. Photograph: Dara Mac Dónaill

A new Oireachtas committee on climate change is to play a central role in the drafting of a new National Energy and Climate Plan which is due to be submitted to the European Union by the end of the year and implemented in 2019.

The plan must set out how Ireland is going to achieve targets on reducing carbon emissions and scale up use of renewable energy up to 2030.

The committee, which will sit for four months, will also set out how the recommendations of the Citizens’ Assembly on tacking global warming should be implemented – it is structured in a similar way to the Committee on the Eighth Amendment which considered the abortion issue.

Chaired by Fine Gael TD Hildegarde Naughton and made up of 16 members – five of whom are Government appointed – it has agreed its work programme with hearings starting in early September. It will report before the end of January 2019.

The new National Energy and Climate Plan will in effect override the Government’s National Development Plan and National Mitigation Plan on reducing carbon emissions, and must set out a clear road map on how legally-binding targets will be achieved, Green Party leader Eamon Ryan said.

The 17 final recommendations of the assembly in its report on How the State Can make Ireland a Leader in Climate Action will be examined in light of the new plan.

“We pushed for this committee to be established, so we’re glad it’s up and running and ready to get to work. It will play a key role in the creation of the new National Energy and Climate Plan,” Mr Ryan said.

“ We need a radical change in climate policy and we believe this committee can deliver similar results to the work done by the Committee on the Eighth Amendment.”

Committee member Senator Grace O’Sullivan, of the Green Party, said: “It’s very clear from recent reports that Ireland is not coming close to its moral and international obligations when it comes to tackling our contributions to climate change. We owe it to ourselves, our children and future generations to radically improve our efforts and move Ireland to a post-carbon future. I’m looking forward to getting started on this process.”

Meanwhile the Oireachtas Committee on Agriculture has called for incentivised measures to deliver Ireland’s climate-change objectives including actions to reduce greenhouse gas emissions arising from farming, rather than increasing taxation.

Basing payments to farmers under the Common Agriculture Policy on achieving environmental targets should be pursued, instead of imposing carbon taxes, it said. The assembly recommended the latter option.

In its report on climate change and sustainability published on Thursday, the agriculture committee recommends incentivising farmers to reduce greenhouse gas emissions arising from livestock and embrace better manure management.