Construction site deaths up this year

Number of building site fatalities to date this year higher than 2018, at seven so far 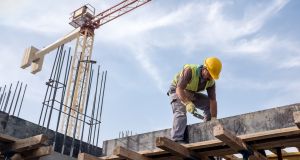 The number of non-fatal injuries on construction sites looks set to be lower this year, with 633 injuries recorded compared with 838 last year. Photograph: iStock

The proportion of workplace fatalities taking place on construction sites has increased in the past year, according to latest figures from the Health and Safety Authority (HSA).

Despite a downward trend in the number of fatalities in the construction sector since 2015, this year to date has seen an increase in deaths. So far seven workers have died in workplace accidents on sites, compared with five deaths last year.

Some 18 per cent of workplace deaths this year took place in the construction industry, up from 13 per cent in 2018 and 2017.

In total, 40 people have died in workplace accidents to date this year, one more than the number of deaths for all of 2018.

The number of non-fatal injuries on construction sites looks set to be lower this year, with 633 injuries recorded compared with 838 last year.

The Construction Industry Federation said long-term figures show a downward trend in construction fatalities, from 15 deaths in 2008 down to five last year and seven to date this year.

The construction sector fatality rate has dropped from 14 deaths per 100,000 workers in the late 1990s down to around three in recent years.

On Monday, workers on building sites downed tools for a minute to highlight workplace safety issues, to mark the start of construction safety week.

Michael McDonagh, a HSA inspector in the construction sector, said mandatory training had “contributed to safety improvements” in the industry in recent years. Workers are not permitted on to building sites unless they have completed a one-day safety course, known as Safe Pass.

Mr McDonagh said construction firms had improved standards around worker safety over the past two decades. About half of construction site fatalities occur where workers fall from heights, he said.

Current skills shortages in the expanding industry was leading to new entrants with less experience entering the workforce, he said. The downward trend in deaths “could go up again” as a result, Mr McDonagh said.

The “fragmentation of the workforce” could also feed into an increase given the practice of using subcontractors on sites was more common, he said.

There was also “undoubtedly under-reporting” of workplace injuries or incidents, Mr McDonagh said.

Tom Parlon, director general of the Construction Industry Federation, said there had been a “huge investment” in health and safety by employers in the sector in recent years.

The requirements for strong records in health and safety would be a “big thing” for global firms based in Dublin such as Google or pharmaceutical firms, he said. Construction companies needed to “tick the box” in terms of safety standards to compete for those contracts, Mr Parlon said.

The issue of under-reporting injuries or accidents would be a “major black mark” against an employer, “so reporting is encouraged”, he said.

John Regan, a Siptu organiser in the construction sector, said the type of injuries sustained by construction site workers could be “life-changing”.

“It’s not just being out of work for a day; we’re not talking about small things here,” he said.

Employers should look at providing documents such as health-and-safety policies to workers in several languages given the higher number of workers in the sector whose first language was not English, Mr Regan said.