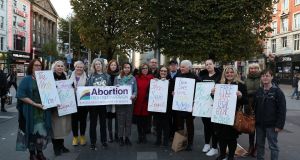 Linda Kavanagh from the Abortion Rights Campaign told a small group on O’Connell Street that the goal had always been to secure free, safe and legal abortion services for women across the island of Ireland. Photograph: Nick Bradshaw

Chants of ‘the North is now, the North is today’ echoed down Dublin’s O’Connell street shortly before 6pm on Monday as a small group gathered to mark the decriminalisation of abortion in Northern Ireland which comes into effect from midnight on Monday.

The vigil, attended by a small group of campaigners, was held in solidarity with groups across Northern Ireland who have been calling for both access to abortion services and the legalisation of same sex marriage which will also be introduced under new legislation.

Speaking at the event, Linda Kavanagh from the Abortion Rights Campaign said the goal had always been to secure free, safe and legal abortion services for women across the island of Ireland. When the vote for repeal passed in 2018 many southern women felt they were “leaving their siblings in Northern Ireland behind”, said Ms Kavanagh.

“This is a historic step but it doesn’t mean the work is over; the work continues here and in Northern Ireland. They still have six months to wait until actual provision can happen.”

People Before Profit TD Richard Boyd Barrett said the DUP’s attempts on Monday to derail the liberalisation of abortion had exposed the party members as “complete dinosaurs”.

“They showed no interest in restoring the assembly to deal with social welfare cuts, poverty, the housing crisis in the north, but when it comes to blocking the right of women to equality or the LGBT community’s rights, suddenly they want the assembly back, it’s absolutely shocking,” said Mr Boyd Barrett.

Abortion rights campaigner Rachael Prendergast Spollen noted that while women in the Republic do have access to abortion services, many women living in rural Ireland are still at a disadvantage due to lack of local services. She called on the HSE to ensure that patients of doctors who refuse to provide abortion services on the basis of conscientious objection be immediately referred onto another medical professional, particularly those without local access to another doctor.

“We’re a long way off a perfect service. As I quoted from our sisters up in the North it’s free, safe, legal and local. The local part is a big missing part of the picture down south. To see it fall short at this late stage is disappointing.”