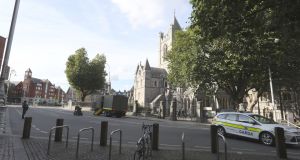 Gardaí and army bomb disposal experts are carrying out a “post-blast analysis” at the site of a small explosion by Christchurch Cathedral on Monday afternoon.

A member of the public alerted emergency services after observing smoke coming from a bin by the Cathedral’s railings on Christchurch Place at about 12.30pm.

Gardaí quickly sealed off the scene and the Cathedral and nearby offices were evacuated.

Not a bomb.
Evidence retrieved from scene for examination. Eod packing up

The Defence Forces’ Explosive Ordnance Disposal (EOD) team arrived a short time later and a Reacher bomb disposal robot was deployed to examine the bin amid concerns the explosion came from a larger device which had failed to detonate fully.

An EOD technician, wearing a blast suit was then sent to conduct and examination.

He retrieved a small object which he placed in a evidence bag and handed over to his colleagues.

The scene was then declared safe and gardaí and EOD technicians began a forensic examination of the bin.

A security source said the most likely explanation is someone lit a firework and placed it in the bin but stressed that investigations are continuing.