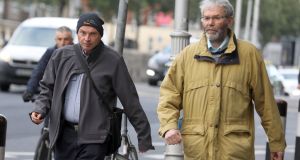 A Garda chief superintendent has accused a whistleblower of an orchestrated campaign designed to prevent his promotion and of character assassination by politicians, a tribunal has heard.

The Disclosures Tribunal is hearing from Garda Nicholas Keogh who alleges that a senior member of the Athlone drugs unit, identified to the tribunal as Garda A, was in an improper relationship with a heroin dealer, identified as Ms B, who had a then-estimated €2,500 a week income.

The tribunal, chaired by Judge Sean Ryan, is investigating how Garda Keogh was treated — whether or not he was harassed, targeted or bullied — after he made his protected disclosure in 2014.

Gda Keogh has alleged to the tribunal that he suffered bullying from then Superintendent Patrick Murray, among others, after May 2014, because of his whistleblowing.

That complaint was investigated by Assistant Commissioner Michael Finn.

On January 18th, 2016, Superintendent Murray applied for promotion and was informed on, May 25th, 2016, that he had been successful but the nomination did not go ahead at that time.

On January 29th, 2018, the Policing Authority informed Supt Murray that he would be promoted and that it was to be back-dated to October 26th, 2017.

Gda Keogh, in his statement, said: “The combination of the general conduct of Asst Comm Finn’s unwieldy investigation of my complaint, together with his obfuscation and unnecessary delay damaged the timely determination of my complaint and I believe facilitated the promotion of Supt Pat Murray to my discredit.”

Judge Ryan heard of diary entries made by Gda Keogh about meetings with then Independent TDs Mick Wallace and Claire Daly in June, 2016.

Gda Keogh wrote letters opposing any promotion of Supt Murray to the Gsoc the Minister for Justice Frances Fitzgerald, the Policing Authority and later to Taoiseach Leo Varadkar.

In his statement, Supt Murray said that Gda Keogh was “casting aspersions” about him. Judge Ryan put it to Gda Keogh: “You said he [Supt Murray] shouldn’t be promoted.”

“Yes,” said Gda Keogh. “At least until the [bullying] investigation is finished, yes.”

Ass Comm Donall Ó Culaláin stated that he was not aware of the bullying and harassment complaint by Gda Keogh when he signed the clearance forms in respect of Supt Murray for the Policing Authority on September 19th 2017.

Mr Diarmaid McGuinness SC, for the tribunal, said that Supt Murray, in his statement, noted that Deputy Wallace had appeared on radio about his promotion and the tribunal was told by Gda Keogh that an injunction blocking the promotion had been considered.

In his statement, Supt Murray said: “Gda Keogh was part of an orchestrated process to damage me as much as he possibly could.”

Mr McGuinness said that Supt Murray was then a subject of “public discussion”.

Gda Keogh told Judge Ryan that there had been no letter from Asst Comm Finn to the approving body, the Policing Authority, to say that Supt Murray was being investigated over the bullying allegation.