Priest did not name ‘paymaster’ in Lunney attack to Garda

September 29th, 2019: Fr Oliver O’Reilly, parish priest of Ballyconnell, Co Cavan, delivers a homily in the wake of the assault on local businessman Kevin Lunney, who is a director of building products manufacturer Quinn Industrial Holdings. 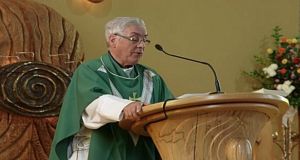 Fr O’Reilly said he sat and listened to Seán Quinn for 10 or 12 minutes and said ‘nothing’ during their tense meeting.

The Co Cavan priest who blamed “a Mafia-style group with its own godfather” for the attack on local businessman Kevin Lunney said he named nobody when interviewed by the Garda.

Two detectives called to Fr Oliver O’Reilly, the parish priest in Ballyconnell, after he delivered a scathing homily at Our Lady of Lourdes Church condemning the “paymaster or paymasters” behind the abduction and torture of Mr Lunney, a director of Quinn Industrial Holdings, a local building materials company.

Fr O’Reilly said he did not tell the two gardaí who he believed the paymaster or paymasters were when questioned. They asked him for a hard copy of his homily and whether he had any evidence to back what he said. The priest replied that he had “no hard evidence about anything”.

“I said, ‘go and talk to anybody around’,” Fr O’Reilly said he told the two detectives.

QIH director John McCartin praised the priest’s stand, saying if the Garda did not “get to the root of the problem” and “find the paymaster” then the attacks would continue.

“If we don’t get that paymaster brought to heel, we can look forward to more of the same,” Mr McCartin told Virgin Media News last night.

Fr O’Reilly told his congregation at Masses on September 28th and 29th that “a rubicon had now been crossed” with the attack on Mr Lunney following years of intimidation against former executives of businessman Seán Quinn who took over the running of his industrial businesses after he lost control of them.

Mr Quinn has condemned the attacks and described the September 17th assault on Mr Lunney as “despicable and totally barbaric”.

He told Channel 4 news last week there was “not a scintilla of evidence” to back up Fr O’Reilly’s claims from the altar and that he called to the priest’s home unannounced the following Wednesday to complain.

He said he “visited” a superintendent to complain about the priest’s homily.

Fr O’Reilly told The Irish Times he sat and listened to Mr Quinn for 10 or 12 minutes and said “nothing” during their tense meeting.

“He just reprimanded me. He was angry. I just listened quietly,” he said.

Mr Quinn, once reputed to be the country’s wealthiest man, remains bitter about the loss of his business as a result of his multibillion losses via a soured investment on Anglo Irish Bank shares.

He said he had “no hand, act or part” in the attack on Mr Lunney but still felt anger at his treatment by his former executives, including Mr Lunney after they took control of the business along with three US investment funds.

Mr Quinn said locals were “very angry” about his “sacking” in 2016.

An internal QIH memo from the US investment funds to the company’s management two months earlier said Mr Quinn had grown “increasingly uncomfortable” with his role as a senior adviser to QIH and that he has “a strong desire to acquire ownership” in the company.

The funds told Mr Quinn’s adviser at the time that he needed to “rectify his relationship with our senior management team” and take “an active approach” against “the increasingly negative activity in the community” if he was to become “bankable in the financial community again”.

Last week, Mr Quinn said he relinquished his ambition to regain ownership of his companies after the attack on Mr Lunney.

“People can say whatever they want about me but I don’t want to be seen as being the beneficiary of abuse or of criminal activity,” he said.