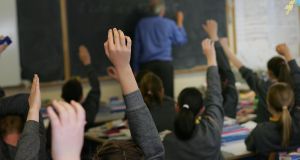 The number of retired teachers returning to schools to help deal with teacher shortages rose by a fifth (21 per cent) last year to 1,626.

Data released by the Department of Education shows the number of retired teachers returning during the 2018-2019 academic year rose by 284 people from the previous year’s 1,342.

The numbers of retired teachers filling empty roles has risen considerably since the 2013-2014 academic year when just 537 people, a third of the current number, returned to work to help with a shortage in schools.

Retired teachers are great when they’re available, but there’s so many schools who can’t get anyone

A spokeswoman for the Irish National Teachers’ Organisation (INTO) said she was not surprised to see the growing reliance on retired teachers given the recent population “bulge” in primary school children. The large numbers of young teaching graduates still choosing to move abroad for work was further exacerbating the problem, she added.

Many young teachers are leaving the country because of “low sense of morale” and a belief that their work does not get the recognition it deserves, she said, while pay levels also played a role in the struggle to retain teachers.

“Retired teachers are great when they’re available, but there’s so many schools who can’t get anyone,” said the spokeswoman. “Classes are being split up and spread among different classes.”

She urged the Government to roll out a national programme of substitute teacher supply panels for primary schools following the introduction of a pilot scheme earlier this year which saw six panels across urban and rural areas. These panels would not only offer consistent cover for pupils but also ensure secure employment for teachers, she said.

A spokeswoman for the association of secondary teachers (ASTI) said that although primary schools were facing the bulk of the teacher shortage, secondary schools were also struggling to hire graduates and were also increasingly relying on retired teachers.

Schools were obliged to “exhaust all other avenues” in hiring teachers before turning to support from retirees, she said, adding that schools were struggling to hire full-time teachers as well as substitutes.

“The evidence shows teachers are going abroad or doing other work. We would say this is to do with the terms and conditions of those entering the profession. We’re hearing about teachers of home economics and science, they have more attractive career prospects. There’s definitely an issue around people making the decision to go elsewhere after qualification.”

The Department of Education acknowledged in a circular sent out to schools in early September that the resource provided by retired teachers in schools was “critical” given the challenge in recruiting teachers in certain subject areas and filling short-term vacancies but noted that “a number of measures are under way to resolve these issues”.