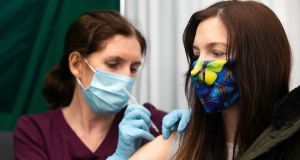 Cabinet has approved a €91 million plan to bring family doctors and pharmacists into the State’s vaccination programme.

The plan was presented to Cabinet on Tuesday morning by Minister for Health Stephen Donnelly, who told colleagues that the new scheme will become key to the widespread vaccination effort once more stable compounds, like that manufactured by AstraZeneca.

Under the deal, GPs and pharmacists will be paid €25 for administering each dose of the vaccine, with an additional €10 processing fee paid per patient. GPs who participate in larger mass vaccination centres which will be established by the HSE will receive an hourly fee of €120. Pharmacists will receive €70 for the same shift.

The cabinet heard that the plan is for the over 70s who are living at home to receive their vaccines from general practitioners in their surgeries – around 484,000 people.

The new deal is scheduled to run for six months and would then be reviewed.

Separately, the Minister for Health, Stephen Donnelly, is expected to tell the Cabinet on Tuesday that a Department of Health review carried out in November found no evidence to support allegations that student nurses had been exploited during their placements in hospitals.

The review also found that the disadvantages of converting student nurse placements into healthcare assistant posts in hospitals would outweigh the advantages. However, an option for such a scheme, which was introduced for a number of months last spring by the then minister for health Simon Harris, should be retained, according to the review.

On Saturday, Mr Donnelly ended student clinical placements in hospitals for at least the next two weeks to free up training personnel to return to frontline roles.

Before Christmas there were claims that student nurses were being exploited both in terms of their pay and in relation to duties they were being asked to carry out.

The Irish Nurses and Midwives Organisation said in October student nurses were “effectively being asked to work as staff for no pay”.

Taoiseach Micheál Martin said in December, on foot of concerns raised by Opposition deputies, that there should be investigations by the HSE if student nurses are being “exploited or abused” by being asked to do work outside of their training.

He said if nurses were rostered for a 13-hour shift or a 10-hour shift, they should be paid and that no first-year student should be treating a Covid patient.