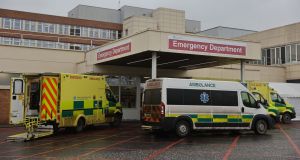 A further 19 people with Covid-19 have died in Northern Ireland, the North’s Department of Health (DoH) said on Monday.

It brings the total number of fatalities reported by the Department to 1,625.

However, the number of people testing positive for the virus each day is falling, with 640 people confirmed to have coronavirus in the previous 24 hours up to 10am on Monday.

In the last seven days 6,647 cases of the virus were identified, compared to 9,666 in the previous seven-day period, the Department said.

A total of 823 people with Covid-19 are receiving treatment in the North’s hospitals, with 65 in intensive care. Overall, hospital occupancy is at 93 per cent, with one site – the South West Acute Hospital in Enniskillen – operating at over-capacity on Monday.

The North’s Minister for Health, Robin Swann, told the BBC that hospitals would come under “real, intense pressure” in the week ahead, and the worst-case scenario was that there could be up to 1,200 Covid-19 inpatients.

The chair of the representative body the British Medical Association (BMA) in Northern Ireland, Dr Tom Black, warned on Monday that the weeks ahead were “going to be the most difficult in the health service probably ever” and he and his colleagues were worried it could be overwhelmed.

He told the BBC the current pressures on doctors, nurses and other healthcare workers were “sobering and mind-numbing”, and the BMA was worried about the mental strain they were under.

While there was “light at the end of the tunnel, we’ve a long difficult tunnel to go through before we go out the other side and see the benefits of the vaccine”, Dr Black said.

“When you have such overwhelming demands on the service . . . we’re worried that the service could be overwhelmed and difficult decisions could be made.”

Meanwhile, the Government has said there is “commitment” to finding a solution on the sharing of data from passenger locator forms between North and South.

In Northern Ireland the Deputy First Minister, Michelle O’Neill, told the Assembly on Monday it was “regrettable” the issue had not yet been resolved, but she believed the outstanding legal issues had been addressed so she did not see any barrier to the sharing of information, and hoped a meeting on Wednesday would “allow some opportunity for there to be a way forward”.

A spokeswoman from the Department of Health said officials from the departments on both sides of the Border had discussed the issue in recent months, with the most recent meeting on Friday, and the Minister for Health, Stephen Donnelly, had written to his counterpart in the North, Robin Swann, on January 12th.

There were, she said, “legal and data protection issues which must be addressed before a data sharing agreement can be established, while ensuring Ireland complies with its GDPR obligations” and both Departments of Health were “working to understand the data that NI wishes to obtain and how they propose to process this data.

“This will allow this Department, working with its internal legal advisers, and in consultation with the Attorney General as appropriate, to determine the policy and legal issues that arise.

“The Minister is aware of the risks posed to the entire island by international travel during the pandemic and is committed to strong, effective, and appropriate co-operation in order to manage these risks,” she said.