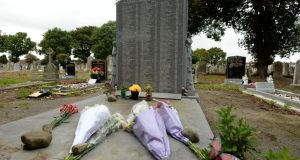 Graves of those who died at the Bethany home, in Mount Jerome Cemetery. Photograph: Alan Betson

The Irish Church Missions (ICM) has said it “did not found, manage or finance any mother and baby homes”, after the Commission of Investigation into Mother and Baby Homes described it as “prominent in the running” of Bethany home in Dublin.

ICM said in a statement “some staff and supporters of ICM also volunteered in Bethany home”. It said it was “undoubtedly part of a wider church and society that did not question the existence or role of the homes”, and apologised “to survivors for any wrongs that were committed by those associated with ICM”.

It was “glad that our historical records were of some use to the commission during the course of their investigation into Bethany home” and hoped publication of the report would be “a significant step towards a greater acknowledgment and understanding of this tragic aspect of our shared national history”.

The ICM was criticised at the weekend for not commenting on the report by commission.

The commission report described ICM as “prominent in the running of Bethany”. In a sermon at the weekend Church of Ireland Canon Patrick Comerford, of the Rathkeale and Kilnaughtin group of parishes in Limerick, said Bethany “was founded by an extreme evangelical group, the Irish Church Missions, in 1922”.

Describing ICM as “the institution singularly responsible for the Bethany home”, he said it had “remained singularly silent since the report was published, unlike, say, the many orders of nuns that have apologised”.

He said the archbishops had tried to “deflect responsibility” in calling on the commission to correct its report which said Bethany was “an amalgam of two charities” both “associated with the Church of Ireland”.

ICM, they said, was “founded as a private mission in England in March 1849 by an Anglican clergyman”. It had “an independent management” and “raised much of its funding privately while viewing itself as an Anglican entity working alongside the church on the island of Ireland”.

The archbishops said they would also be seeking a correction to an inference in the commission report which seemed to imply “a governance link” between the church and the Bethany home.

This was “factually inaccurate” as the two charities referred to in the report as the foundation of Bethany, were not Church of Ireland affiliated as stated, they said.

The Dublin Prison Gate Mission was a Quaker charity while the Dublin Midnight Mission had its origins “in a London-based gentlemen’s charity” and was not connected to the Church of Ireland, they said.

According to the commission report the Bethany home, based at Rathgar in Dublin, was open from 1922-1971 and accommodated 1,584 women and 1,376 children. A total of 262 children associated with the home died, 61 per cent between 1937 and 1947. Their burials are properly recorded at Mount Jerome cemetery.