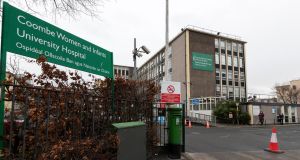 Two of the recipients of the Covid-19 vaccine at the Coombe are understood to be children of the hospital’s master. Photograph: Colin Keegan, Collins Dublin

A former master of the Coombe Hospital in Dublin has called for an inquiry into the issue of the maternity hospital having administered Covid-19 vaccines to 16 family members of staff.

The board of directors of the Coombe hospital met on Monday evening to discuss the controversy.

The relatives were not frontline healthcare workers, and nine of the group were over 70 years of age. Two of the recipients are understood to be children of Prof Michael O’Connell, master of the Coombe hospital.

A former master at the hospital, Prof Chris Fitzpatrick, called for an independent investigation into the matter.

Prof Fitzpatrick, a consultant obstetrician at the Coombe, said he was “deeply concerned” to learn non-frontline relatives of staff had received vaccines.

“It is essential that the public receive greater reassurance, and that the rollout of a lifesaving vaccination programme during this very difficult time is conducted with transparency, equity and accountability, and in accordance with national guidelines,” he said. There needed to be an independent investigation “undertaken quickly to clarify the facts”, he added.

Prof O’Connell apologised on Sunday and said he regretted that relatives of hospital employees received the vaccine from doses left over on January 8th, after more than 1,100 doses were given to frontline staff, GPs and local community health workers.

Minister for Health Stephen Donnelly spoke to the chairwoman of the Coombe hospital’s board, Mary Donovan, about the controversy on Monday afternoon.

Minister for Finance Paschal Donohoe said: “What happened in the Coombe hospital should not have happened.”

Minister for Further Education Simon Harris said it was important to “get to the bottom” of why 16 family members of staff at the Coombe hospital received leftover Covid-19 vaccinations earlier this month.

The Health Service Executive said it had since issued guidance on January 12th around how excess doses should be distributed.

Meanwhile, two family members of staff at the Rotunda Hospital, Dublin received leftover Covid-19 vaccines that the maternity hospital said it feared would be wasted otherwise.

The hospital received its first batch of 93 vials of Pfizer/BioNTech Covid-19 vaccine on January 6th, and said it was approved to administer six doses from each vial.

However, an excess of vaccine was left over after the approved six doses were administered from each vial to hospital staff.

The hospital then administered these excess doses to non-hospital staff, such as local GPs and people in vulnerable categories, including a small number of relatives of employees.

“These remnants would have expired within a number of hours if not used and would have been discarded,” he said.

The hospital confirmed 37 people, including GPs and “members of other vulnerable groups” received the excess doses. The Irish Times understands there were at least two relatives of staff members, who were in vulnerable categories, among this cohort who received the vaccine.

The hospital said this was “the morally correct thing to do and a wholly appropriate response”, so that no vaccine was wasted.

“It must be noted that even if Rotunda staff could attend at short notice to receive the vaccine remnants, the hospital was not approved to administer it to them,” the spokesman said. “The 37 non-Rotunda personnel who received the vaccines did so in the full knowledge they were receiving a non-approved vaccine remnant,” he said.

Separately, an “administrative error” led to a number of staff on maternity leave in Dublin’s Temple Street hospital receiving vaccines before other colleagues working in the hospital.

A spokeswoman for Children’s Health Ireland said the issue had been “rectified”, with subsequent appointments offered to staff on maternity leave cancelled. A number of those on maternity leave who were vaccinated were due to return to work shortly anyway, she said.