C-Day: Everything you need to know about today's political drama

Results are due on Friday, and if deal passes, a new taoiseach will be elected on Saturday 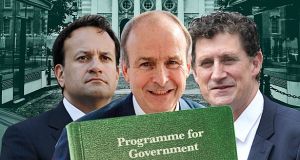 The leaders of Fine Gael, Fianna Fáil and the Greens were expected to meet on Thursday to decide how to configure government departments and allocate individual portfolios to each party. Graphic: The Irish Times/Paul Scott

With voting on the programme for government coming to an end and a decision due shortly on whether Fianna Fáil, Fine Gael and the Greens will enter a historic coalition, here is a guide to what to expect on Friday and beyond.

How does the voting process work in each party?

The ratification processes in Fianna Fáil, Fine Gael and the Greens for the draft programme for government are coming to an end.

Votes will be counted on Friday.

Fine Gael requires the approval of its internal electoral college, rather than every party member, and only has 700 votes to count.

It is expected that its count will begin after lunchtime on Friday and will be relatively short.

The Greens’ count will start at noon with a result expected between 6pm and 7pm.

The Greens and Fianna Fáil are running one member, one vote ballot and will take longer to count than Fine Gael.

Fianna Fáil expects its own count to be concluded around tea time.

With a large number of Green Party elected representatives from Northern Ireland against the deal, it is expected most of the 195 northern members could oppose the deal.

However, the number of those who registered to vote from Northern Ireland was relatively low - giving hope to those in favour of a deal.

The Greens initially allowed telephone voting only for members outside the the Republic and Northern Ireland, but this week widened the eligibility to allow anyone who has not received their ballot paper to vote over the phone.

Those wishing to do so must email the Green Party headquarters with their name, email, phone number, address, and a suitable time to vote by phone. Party officials will then check that person is eligible to vote.

A degree of co-ordination in the announcement of the three parties’ results on Friday is expected but has not yet been finalised.

If the three parties approve the deal, what happens next?

There will be a full sitting of the Dáil in the Convention Centre, Dublin, on Saturday morning to elect Fianna Fáil leader Micheál Martin as Taoiseach.

The Dáil cannot sit in Leinster House due to the need for social distancing if all TDs are present.

The sitting will begin at 10.30am and the proposer and seconder for each nominee for the position of taoiseach will get five minutes speaking time each.

This will be followed by ten minutes of speeches from each party or group that has not put forward a nomination for Taoiseach.

Votes will then be taken and, when, as expected, Mr Martin is elected, he will then be invited by the Ceann Comhairle to make a brief statement.

The House will then adjourn to allow Mr Martin receive his seal of office from President Micheal D Higgins in Áras an Uachtaráin, which is expected to happen at around 12.30pm.

The details of how this ceremony - and the later ceremony where the new Cabinet receive their seals of office from Mr Higgins - will operate with social distancing have not yet been finalised.

When will the Cabinet be picked?

Upon receiving his seal from the President, it is expected Mr Martin would then travel to his new office in Government Buildings where he will appoint the new Cabinet.

The three leaders are expected to meet on Thursday to decide how to configure government departments and allocate individual portfolios to each party.

Each leader, however, will choose their own people for their allocated portfolios without the need to consult the other leaders.

When will the Dáil sit again?

The House is expected to reconvene at 4.30pm on Saturday when the members of the new cabinet will be nominated for approval by the Dáil. The Taoiseach will make a ten minute speech, as will the leaders of all parties and groups, with 100 minutes in total set aside for speeches on the nominations of new ministers.

However, this stage of the process can drag on and could stretch on longer than expected. Votes will be taken at the conclusion of speeches and the new cabinet will travel to Áras an Uachtaráin to receive their seals of office and hold their first meeting.

What about the Taoiseach’s nominees to the Seanad?

The Government believes a new taoiseach must nominate 11 members of the Upper House in order for crucial legislation to be passed through the Oireachtas, such as the renewal of the Offences Against the State Act.

The Government says this cannot be done by Mr Varadkar as acting taoiseach.

Of the 11, Fianna Fáil and Fine Gael will each choose four and the Greens will get two. The remaining one will be an Independent nominee, most likely from Northern Ireland.

The Programme for Government says at least half of those nominated should be women.

Mr Martin is expected to nominate the 11 on Saturday, with the fully constituted Seanad then expected to sit on Monday to deal with outstanding legislation.

And if one of the three does not ratify coalition?

The political system will be thrown into crisis. There are several scenarios that could play out. Taoiseach Leo Varadkar could try to dissolve the Dáil. He has said consistently that his party is interested only in a stable government involving three parties and not Independents. That is borne from past experience where governments that relied on Independent TDs became increasingly unstable as individuals withdrew support, either over a constituency or national decision that affected their policy areas.

Would that mean an election?

Not necessarily. The State is still in the middle of arguably the worst crisis in its history and the question arises as to the advisability of holding an election when the pandemic is still live. Besides, the decision of the Taoiseach would not be final. One of the few executive powers the President has is conferred under Article 13 of the Constitution. He may “in his absolute discretion refuse to dissolve the Dáil”. If he refused, it would mean that parties would have to re-engage to see if an alternative administration could be agreed. If an election is held, it must be held within 30 days of the Dáil being dissolved.

1 Kanye West says he will run for US president in 2020
2 Bobby Storey: The IRA's planner and enforcer who stayed in the shadows
3 Arson attack at home in Dundalk leaves five in hospital
4 Trump vows to ‘safeguard’ America’s values and defeat 'radical left, anarchists, agitators, looters'
5 Covid-19: Travel restrictions to stay and 'green list' put on hold amid fears of second wave
Real news has value SUBSCRIBE