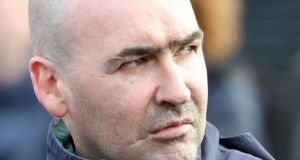 Sean Kelly: convicted of the IRA bombing of Frizzell’s fish shop on the Shankill Road in Belfast in 1993, which killed nine people, including two children.

The Shankill bomber Sean Kelly will not be prosecuted over an incident at a shopping centre in Belfast last month.

A spokesman for the North’s Public Prosecution Service (PPS) said the available evidence was “did not provide a resonable prospect of conviction.”

A video which appeared to show Kelly being restrained following an apparent disagreement was posted on social media on May 2nd, and widely shared.

The North’s justice minister, Naomi Long, reported to the incident to the police, who began an investigation.

Mr Kelly was interviewed by police, and a file passed to the PPS.

He was convicted of the IRA bombing of Frizzell’s fish shop on the Shankill Road in Belfast in 1993, which killed nine people, including two children. Another bomber, Thomas Begley, was also killed in the explosion.

Mr Kelly received nine life sentences for his role in the bombing, but was released in July 2000 under the terms of the Belfast Agreement.

The families of some of the victims of the bomb had called for the Secretary of State to revoke his licence and return him to prison.

In a statement on Wednesday, a spokesman for the PPS said a 46-year-old man had been considered for charges of common assault, possession of an offensive weapon and disorderly behaviour and the available evidence had been carefully considered by a senior prosecutor.

The key evidence, the spokesman said, was a clip of video footage which “clearly” only captured part of a continuing incident.

“It was considered that the footage, of itself, was incapable of providing a reasonable prospect of conviction for any offence.

“It did not provide any context to the events which had been recorded such as how any confrontation had commenced or the circumstances in which a man holding what appeared to be a thin metal rod came to be in possession of it.

“There was no evidence available from any witnesses that could have provided the missing context,” the spokesman added, and in these circumstances it was considered the available evidence was insufficient to meet the test for prosecution.

The PPS spokesman acknowledged “the level of concern caused by the video after it was circulated on social media, and we appreciate this outcome will be disappointing to those who share those concerns.

“However, we can offer reassurance that this decision was reached only after a most careful examination and consideration of the evidence and information available,” he said.