FF, FG and Greens agree ‘most of programme for government’ in marathon talks

Leaders of parties set to meet on Sunday 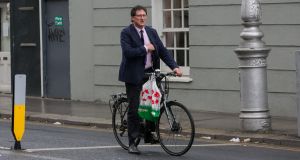 Negotiators from Fine Gael, Fianna Fáil and the Green Party met until the early hours of the morning on Sunday as it is expected a deal on a programme for government will be reached soon.

Green Party TD Ossian Smyth, who is part of his party’s negotiating team, Tweeted shortly after 4.30am: “The three negotiating teams agreed most of a programme for government this morning. A small number of issues have been left to the party leaders to decide later today. A lot of good stuff in there!”

The leaders of the three parties are expected to meet later on Sunday as the  outstanding issues are discussed. However a time for that meeting is not clear.

On Saturday, Minister for Agriculture Michael Creed said an agreement on a programme for government “is more likely than not at this stage."

“Whether or not that acquires the support of three parties through their individual approval processes remains to be seen,” he added on RTÉ Radio 1’s Countrywide programme.

Green Party deputy leader Catherine Martin also indicated a deal was probable this weekend, adding on her way into talks that a number of issues “need to be ironed out”.

Sources on all sides say that, barring last-minute hiccups, there are no substantial policy disagreements standing in the way of an agreement to form a coalition government, though talks on the precise text of the programme for government – expected to run to over 100 pages – continue on Sunday, it is expected.

If the leaders sign off on the deal it will then need to be approved by the parties.