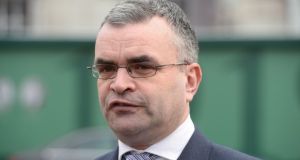 FF deputy leader Dara Calleary said there has been very positive engagement and criticism had been less than was anticipated. Photograph: Dara Mac Dónaill

Fianna Fáil TDs have said the feedback from its own engagement with party members has been largely positive although there were recurrent and frequent questions about how the party would retain its identity in government.

The party has held Zoom meetings with members in most of its 43 Comhairle Dáil Ceanntar areas, with as many as 60 participants in rural areas but considerably less in Dublin constituencies. It has also held meetings with other groups including county councillors and the party’s women’s network – a video conference that involved 120 participants.

There was more criticism from members in some counties such as Galway, Leitrim and Donegal. However, the expected antipathy in rural areas to the Green Party over agriculture policy hardly featured. New funding for the Rural Environmental Protection Scheme allayed many concerns.

Robert Troy, the TD for Longford-Westmeath, said members were happy enough with the actual programme for government deal Fianna Fáil struck with Fine Gael and the Green Party. He believed it could be backed by 70 per cent of members.

The party acknowledged that many of its older members did not have the technology or know-how to participate.

Deputy leader Dara Calleary said there has been very positive engagement and criticism had been less than was anticipated. “There are genuine concerns and we know some people will not be able to support it and I respect that,” he said.

Galway East TD Anne Rabbitte said members had recognised Fianna Fáil wins in housing, health and in local issues like roads maintenance. “If Micheál Martin is taoiseach and if we get the right ministries, we can deliver for Fianna Fáil,” she said.

All TDs contacted said the loss of identity for the party was a big issue, with concerns Fianna Fáil would be unable to distinguish itself from Fine Gael in government.

“Historically, we have been defined by our time in government,” said Sligo TD Marc MacSharry. “Confidence and supply was difficult for us. Members are asked how do we get our identity back. The only way to do that is to deliver in government.”

Mr Troy said: “At the meetings, members have expressed a fear of losing identity going into a coalition with Fine Gael. The last four years did not do enough to differentiate one party from the other. They just feel there is a risk it will be hard to maintain our own separate identity in this arrangement.”

Another Fianna Fáil Oireachtas member said privately that the sentiment of members has become more positive in the past 10 days and many will now back the deal. According to this Senator, the fears over agriculture did not materialise and few members wanted to vote against a deal that would see Mr Martin appointed as taoiseach.

Galway West TD Éamon Ó Cuív has written to party members warning them that accepting the coalition deal will be “the beginning of the end” for Fianna Fáil.

“It is my regret,” Mr Ó Cuív warned, “if we enter this coalition, we will hasten the demise of our party and once again create a political system with two large parties, but that Fianna Fáil will not be one of them”.

He also said that the party’s recent poll rating of 14 per cent (in this week’s Irish Times/Ipsos MRBI opinion poll) “will only get worse” if it joins the proposed three-party coalition.

Mr Ó Cuív said there are alternatives to the coalition, but they have not been explored by the party leadership. Instead, he said, “the Irish people are being presented with an artificially diluted ‘take it or leave it’ choice between this coalition, another election or a ‘constitutional crisis’”. But he said it is clear that the “Irish electorate have firmly rejected returning Fine Gael to government. Yet this now is precisely what the Fianna Fáil membership is being asked to do”.

Mr Ó Cuív has been a long-time opponent of party leader Micheál Martin, and favours a coalition with Sinn Féin.